The Altar with the
Ecclesiastical Dispute of the Holy Sacrament
(P.P. Rubens, ca. 1609)

Ca. 1609 the Dominicans ordered this altarpiece and the two predella  pieces Moses and Aaron from P.P. Rubens. As a result of the new choir rood loft with two side altars, the Baroque Sacrament’s Altar was built by Pieter Verbruggen in 1654-1656. Due to of aesthetic (and other?) motives the new altar – according to contract – was conceived as a counterpart of the opposite Mary-altar, which had been initiated four years earlier. To fit neatly into this portico altar Rubens’ panel was enlarged in 1680, especially at the top and bottom, as well as slightly in the width (up to 377 x 246 cm / 12.37 ft x 8.07 ft). 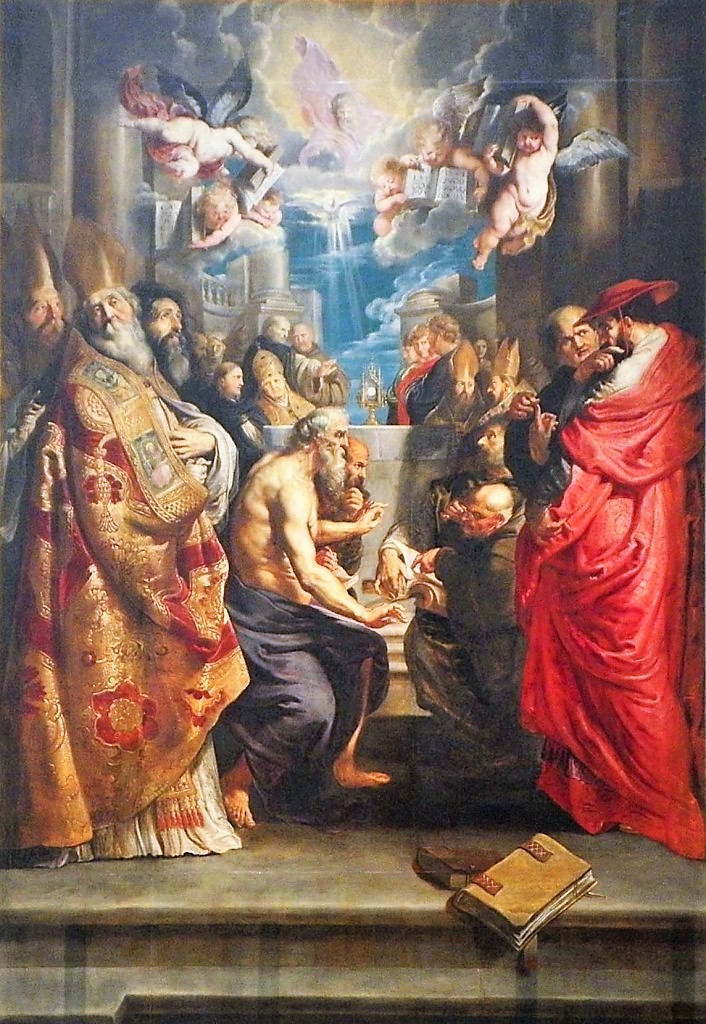 In 1616 the painting was entitled ‘The reality of the Holy Sacrament’, in other words: The real presence of Christ in the Holy Sacrament. The term ‘dispute’, derived from Italian, by which this painting is known, must not be interpreted as a discussion because of a difference in opinion, but rather as a colloquium among like-minded Catholics looking for arguments to back up this point of doctrine concerning the Eucharist. That it does not concern a pious worship of the Sacrament, but an intellectual dialogue, characteristic of the scholastic tradition, is made clear by the gesticulations of authorized scholars and ecclesiastical office holders: “fingers are being raised, are pointing, emphasizing, refuting and summing up the arguments”. The mannerist, slightly elongated figures are typical of Rubens’ early period.

God the Father (∞), in heavenly soft shades of white, rosy and yellow, and the dove, symbol of the Holy Ghost, in the upper register emphasize Jesus’ real presence in the consecrated host.

Frisky little angels (E) hold open the Books of the Bible, showing phrases from the New Testament that give evidence to the actual presence of Jesus in the Eucharist, but in order to allow the spectator to read the text from a large distance, only one syllable a line has been depicted. 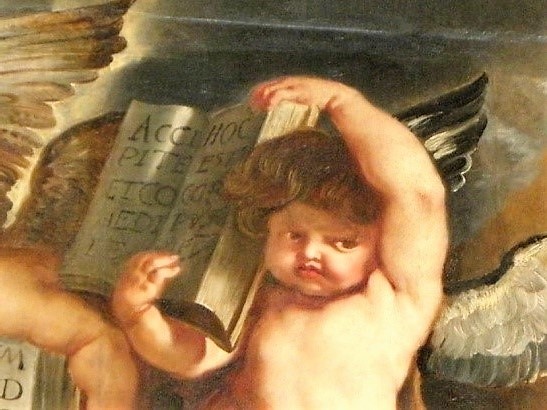 Moreover Rubens accentuates this point of doctrine by the composition and the colours.

The rhombic composition must create a tension around the white host, which, set in a gothic cylinder monstrance, not only stands in the iconographical centre of interest, but was initially, before the enlargement of the panel in 1680, the formal centre as well.

The supernatural dimension in the tangible Holy Sacrament is stressed because the white host is marked off against the heavenly, blue middle section.

This blue colour is accompanied in the colour composition by both figures in the foreground: on the left in a golden cope, on the right in cardinal red. Thus the three primary colours are neatly divided in a triangular pattern.

At the time of the Counter Reformation the Catholic Church wanted to build and defend its views, also concerning the Eucharist, against the Protestants by calling upon authorized theologians from the unsuspected, early ages of Christianity. That is why the four great western Fathers of the Church come to the foreground. The two bishops on the left , in golden damask copes are Ambrose (Am), in the front, as the elder one who turns his head towards the second one, his pupil Augustine (Au) behind him.

As their full counterparts we find on the right a cardinal, possibly Jerome, in a cautious pose, and a monk in a black Benedictine habit, possibly Pope Gregory I The Great (G?), who at first was the founder of a monastery and abbot. But if he is accompanied by an old holy man who is half-naked (H?), that must be Jerome as a penitent in the desert, who always has a cardinal red mantle with him. In that case the cardinal on the right would be the scholar Saint-Bonaventure. Could the black-haired man behind Ambrose be identified as John the Baptist, who in the desert was not at all concerned about a delicate appearance and pointed out Christ as the “Lamb of God” (the pre-eminent term of address for Jesus, as present in the host of the Holy Communion)? Behind the half-naked man, the man with the long bald head, pulls his beard thoughtfully, and takes notes; he bears a strong resemblance to Saint-Paul (P).

In that case his writing activity refers to the oldest explanation of the Last Supper and to the oldest formulation of the Eucharist, namely in his First Letter to the Corinthians (11:23-39). The Pope, wearing a golden tiara, is Urban IV (U), who through the agency of the Liège beguine, Saint Juliana of Cornillon (♀) behind him, established the feast of the Holy Sacrament in 1264: ‘Corpus Christi’. He is engaged in a conversation with the great Domincian theologian Thomas Aquinas (T), whom we recognize by the golden beaded garland at breast height. Among the other clergymen in varying habit, there is still another Dominican. The beardless young man in a toga, (dressed in red) is John the Evangelist. Both his neighbours are probably evangelists as well.

In 1794 the French Revolutionaries carried Rubens’ painting along to Paris as spoils of war. in 1815 the altar piece returned to Antwerp, in 1816 to its original spot.

You can study this painting in detail via this link.

The Chapel of the Holy Sacrament and of the Sweet Name of Jesus
The Altar framing (Peter I Verbruggen, 1656)
Further decoration for the devotion to the Holy Sacrament
The Communion rails (Sebastiaan de Neve, 1655-1657)
The altar of the Holy Cross
No convent church without a choir
Our Lady's chapel and Our Lady of the Rosary