The cycle of Paintings The Fifteen Mysteries of the Rosary 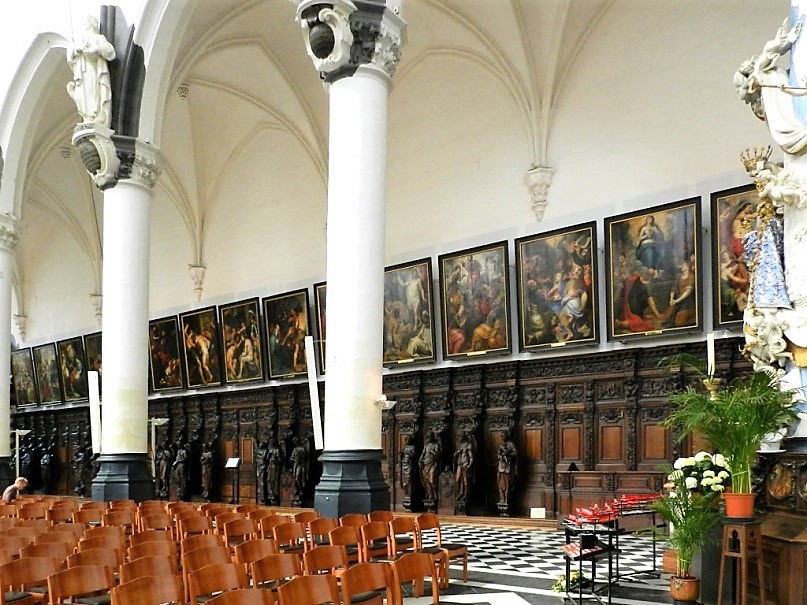 The Rosary offered the illiterate of the 17th century something to hold on to in order to contemplate the most important passages from the lives of Jesus and Mary. As they prayed the one hundred and fifty hail Marys of the Rosary ten per mystery, lay people could imitate monks and nuns praying the one hundred and fifty psalms of the breviary. The fifteen Mysteries of the Rosary put together constitute Mary’s photo album as it were, though one that does not only show the joyful and the glorious moments, but – in fairness – the sorrowful moments as well. The fifteen Mysteries are put in a fixed sequence: first the five Joyful Mysteries, then the five Sorrowful Mysteries and finally the five Glorious Mysteries. There was no sign yet of the fourth series, the Luminous Mysteries, added in 2002 by Pope John-Paul II. The Joyful Mysteries deal with Mary as the young mother-to-be: the Annunciation to Mary, Mary’s visit to Elisabeth, Jesus’ birth, the Presentation of Jesus at the Temple, the finding of Jesus in Jerusalem. Whereas one does not like to be reminded of one’s grief in a common photo album, yet the Sorrowful Mysteries are portrayed here indeed, to show in all honesty what life is like. Mary was able only to be present while Jesus was carrying the Cross and at His Crucifixion, but not at the three previous Mysteries. While Mary is at first a witness of Jesus’ Glorious Mysteries like the ResurrectionThis is the core of the Christian faith, namely that Jesus rose from the grave on the third day after his death on the cross and lives on. This is celebrated at Easter. and the Ascension, as well as of the Descent of the Holy SpiritThe active power of God in people. It inspires people to make God present in the world. Jesus was ‘filled with the Holy Spirit’ and thus showed in his speech and actions what God is like. People who allow the Holy Spirit to work in them also speak and act like God and Jesus at those moments. See also ‘Pentecost’. upon the Apostles, she has the leading part in the latter two: her Assumption and her Coronation in Heaven.

Before 1617 the cycle of fifteen paintings on panel was commissioned for the northern aisleLengthwise the nave [in exceptional cases also the transept] of the church is divided into aisles. An aisle is the space between two series of pillars or between a series of pillars and the outer wall. Each aisle is divided into bays., which, as a continuation of the Mary-altar at the time, develops into a grand Chapel
A small church that is not a parish church. It may be part of a larger entity such as a hospital, school, or an alms-house, or it may stand alone.
An enclosed part of a church with its own altar.
of Mary at the far end of that naveThe rear part of the church which is reserved for the congregation. The nave extends to the transept.. In line with the chronological order of the story, the series reads from left to right, is therefore hanging from west to east, and comes to an end near the altarThe altar is the central piece of furniture used in the Eucharist. Originally, an altar used to be a sacrificial table. This fits in with the theological view that Jesus sacrificed himself, through his death on the cross, to redeem mankind, as symbolically depicted in the painting “The Adoration of the Lamb” by the Van Eyck brothers. In modern times the altar is often described as “the table of the Lord”. Here the altar refers to the table at which Jesus and his disciples were seated at the institution of the Eucharist during the Last Supper. Just as Jesus and his disciples did then, the priest and the faithful gather around this table with bread and wine..

As no fewer than eleven different painters were asked simultaneously to account for at least one scene, this resulted in a unique series, representing the Antwerp School of Painters, including the works by the three great masters Rubens, Van Dyck and Jordaens, and those by Cornelis de Vos and David Teniers the Elder. At the moment SaintThis is a title that the Church bestows on a deceased person who has lived a particularly righteous and faithful life. In the Roman Catholic and Orthodox Church, saints may be venerated (not worshipped). Several saints are also martyrs. Paul’s Church is the only place where one can find a Rubens, a Van Dyck and a Jordaens in their original locations. Although the eighteen year old Van Dyck was but a novice, all three of them were remitted an equal sum of money. They were obviously appreciated better by the commissioners than the other painters, as the only one who was still estimated higher – so we learn from his fee – was Hendrick Van Balen. From the point of view of style the paintings by Rubens, Van Dyck, Jordaens and David I Teniers can be dated from ca. 1616-1617.

Most of the paintings are attributed to a benefactor known by name; only the fifth and the fourteenth were paid for with general contributions. Next to a PreacherA priest, deacon or lay person who explains the Bible readings during the celebration of Mass. Sometimes a preacher also acts outside of Mass celebrations (and in the past he did so regularly) to clarify certain points of faith and to encourage the churchgoers to a more Christian way of life. and possibly an artist, other benefactors may have had a firm foothold in the Dominican Church as well, either as a (possible) relative of the Preachers, as the current or future deanPriest – usually a parish priest himself – who coordinates the work of several neighbouring parishes [a deanery]. of the Brotherhood of the Rosary, or because they – or possibly their relatives – were buried there.

The scientific justification of the data concerning the Mysteries of the Rosary of SaintThis is a title that the Church bestows on a deceased person who has lived a particularly righteous and faithful life. In the Roman Catholic and Orthodox Church, saints may be venerated (not worshipped). Several saints are also martyrs. Paul’s in Antwerp can be found HERE.

It is basically written in Dutch, but using the translate button you can ask for an instant translation in English

Our Lady's chapel and Our Lady of the Rosary
A church for sermon, confession and music