Our Lady’s Chapel
A small church that is not a parish church. It may be part of a larger entity such as a hospital, school, or an alms-house, or it may stand alone.
An enclosed part of a church with its own altar.

and
Our Lady of the Holy Rosary

The Altarpiece of Our Lady of the Rosary 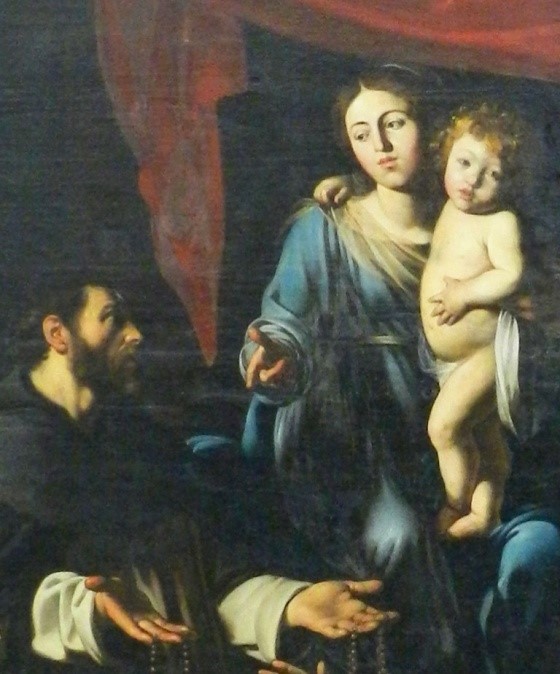 Michelangelo Merisi, better known by the name of his native village Caravaggio, painted Our Lady of the Rosary during his stay in Naples in 1606-1607.

The man (♂C)  in the carefully ironed ruff collar, kneeling down respectfully, is most likely the commissioner. By seeking eye contact with the spectator he attracts our attention, but at the same time he exerts a helpful, guiding role for the spectator’s Baroque empathy. It is obvious that this altarThe altar is the central piece of furniture used in the Eucharist. Originally, an altar used to be a sacrificial table. This fits in with the theological view that Jesus sacrificed himself, through his death on the cross, to redeem mankind, as symbolically depicted in the painting “The Adoration of the Lamb” by the Van Eyck brothers. In modern times the altar is often described as “the table of the Lord”. Here the altar refers to the table at which Jesus and his disciples were seated at the institution of the Eucharist during the Last Supper. Just as Jesus and his disciples did then, the priest and the faithful gather around this table with bread and wine. piece was made for some Dominican church in Naples or its surroundings, like the San Domenico Maggiore, even maybe for the local Colonna family’s burial chapel
A small church that is not a parish church. It may be part of a larger entity such as a hospital, school, or an alms-house, or it may stand alone.
An enclosed part of a church with its own altar.
, devoted to Our Lady of the Rosary. In that case it is tempting to interpret the brightly illuminated grooved pillar in the background as a symbol of the commissioner’s surname.

For an unknown reason it was not accepted and already in 1607 it ended up in the possession of the art dealer Louis Finson, who returned to the Low Countries in 1612. After his death in 1617 the painting probably landed in the Antwerp Dominican church via the Dutch art trade and through the agency of a number of painters, among whom Peter Paul Rubens, Hendrik Van Balen and Jan Brueghel the Elder (nicknamed ‘Velvet’ Brueghel). They purchased it “out of affection for the chapel” as well as “in order to have a rare piece in Antwerp”. However unmistakably Rubens’ admiration of Caravaggio may have played a role in the motivation of the purchase, it does not allow us to allege with certainty that Rubens took the initiative for this acquisition.

From the Church Interior of 1636 we learn that the immense canvas (11.94 ft high x 8.16 ft wide) was at first in the midst of the then recently completed series of the rosary. Also since it was displayed as an eye-catcher from the 1650’s onwards on the therefore specially constructed portico altar, it has kept this function of a kind of heavenly mandate for the devotion of the rosary.

The further history illustrates once again the ‘the price of its success’. For his wish list for his imperial collection in Vienna, the emperor’s eye in 1785 fell on this Caravaggio, which he probably had admired already years before in the “église des Jacobins à Anvers” (in the Jacobins’ church in Antwerp). Since its departure to Vienna in 1786, where the work of art is now displayed in the Kunsthistorisches Museum, it has been replaced on the altar by the copy by Bernard De Quertenmont. Even if the emperor’s interest counts as a strong sign of appreciation, the copy left behind offers but scant comfort. The allegation that the Antwerpians succeeded in bamboozling the Austrians by giving them the exact copy, must be referred to the realm of romantic, biased fantasy. But tall stories can, of course, be very persistent…

According to a Dominican legend the Virgin Mary would have given the rosary to SaintThis is a title that the Church bestows on a deceased person who has lived a particularly righteous and faithful life. In the Roman Catholic and Orthodox Church, saints may be venerated (not worshipped). Several saints are also martyrs. Dominic during an apparition in 1210, in order to conquer heresy. But in reality the rosary prayers only spread from 1470 onwards. Anyway, with this iconographic type one wanted to offer as it were some ‘heavenly’ authority to stimulate the devotion of the Virgin Mary.

The carefully studied composition contains two schemes, which partially overlap each other. On the one hand the rigid triangular structure results in a very static and hierarchic feeling among Mary, the Dominican clergy and the people, while the large rhombic construction by means of the combined play of hands and looks creates a dynamic interaction among the three categories involved. At the top this rhombic shape is severed by the white erect figure of the Child.

The worshipper who kneels down on the communion railA low enclosure of the choir or a chapel in the form of a long kneeling pew. Before the Second Vatican Council, it was customary to receive communion kneeling on at this pew. is in the best position to look up to this representation. As he is sitting in the same posture as the begging worshippers in the foreground of the painting, he can identify with them more easily.

As the spiritual mediators between the Holy Virgin and the people, both the Dominican saints, Dominic and Peter MartyrSomeone who refused to renounce his/her faith and was therefore killed. Many martyrs are also saints., are of course placed in the central section. One of them looks at us and points at the Child while Dominic directs his (and our!) eyes to Mary. Ultimately the devotion of the rosary aims at coming closer to Mary and via the Mother nearer to her Divine Child, the Saviour of mankind. The strong perspective, with an astounding three-dimensional effect, thus contributes to such an empathic experience of the painting’s representation.