A church for sermon, confession and music 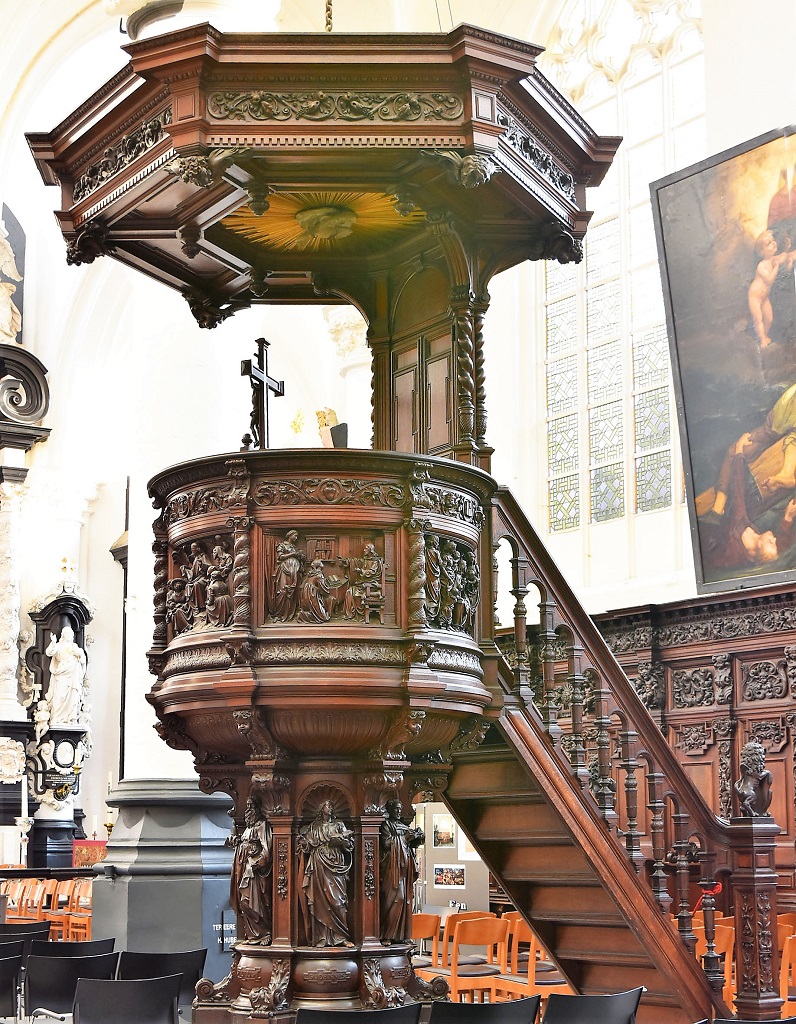 The woodcarving of the neo-Renaissance pulpit was made by Joannes Baptista de Boeck and Joannes Baptista van Wint (1874), who had made the funeral monument for the family of the donor, Jacob de Vries, in the sanctuary six years before. On the base in front figures Paul, the patron saintThis is a title that the Church bestows on a deceased person who has lived a particularly righteous and faithful life. In the Roman Catholic and Orthodox Church, saints may be venerated (not worshipped). Several saints are also martyrs.. On the tub five half reliefs depict the power of Jesus’ word, in other words His ‘preaching’, in various circumstances.

Christ’s conversation with the woman of Samaria
(John 4:5-42) “Tired from his journey” Jesus is sitting at a well (v. 6). Averse to any form of common decency he takes the taboo breaking initiative to start a conversation with the woman of Samaria who comes there to draw water. Jesus points at the well: “Everyone who drinks this water will be thirsty again” (v. 13) “but whoever drinks the water I shall give will never thirst; the water I shall give will become in him a spring of water welling up to eternal life.” (v. 14). In other words: when the preacherA priest, deacon or lay person who explains the Bible readings during the celebration of Mass. Sometimes a preacher also acts outside of Mass celebrations (and in the past he did so regularly) to clarify certain points of faith and to encourage the churchgoers to a more Christian way of life. is convinced that Jesus is the “living water” (v. 11) for every single person, for himself to start with, then he will be better able to convince his audience of this in his sermon. Jesus and his seven fishermen-apostles sail on  Lake of Gennesaret, but they have to contend with a storm. Consequently the wind (represented as Aeolus) is blowing keenly in the top left corner. But the lake is so turbulent that – true to the gospels – the boat is filling with water and threatens to sink. Even the mast has broken here. Only the stern with the rudder is still above the water. There Christ is sleeping (with His head) on a cushion. The apostles beseech Him to calm the storm down and after this wind and sea will obey Him. In other words: God’s word is (more) forceful (than you may think).

Christ preaches to the people In the background there are palm trees. In the middle of an attentive audience of different generations and gender Christ is sitting holding up one finger. In other words: Jesus preaches for the entire people. Jesus is a guest in Martha and Mary’s house. Martha is preoccupied with the busyness of serving, while her sister Mary is sitting at Jesus’ feet, listening. An open book and a small hanging bookcase illustrate Mary’s intellectual interest. Martha has just come out of the kitchen to complain to Jesus about her sister Mary, who lets her do all the work. Jesus, in an armchair, tempers Martha’s displeasure: “Martha, Martha, you are anxious and worried about many things.“ (v.41). While His hand is pointed at the book on the table He says: “Mary has chosen the better part and it will not be taken from her” (v.42). In other words: a bit more attention during the sermon please! Women are coming to Jesus with their children. In the background there are two men with beards, who can be identified as apostles by their bare feet. Let us hope they have learned their lesson: “Let the children come to Me and do not prevent them” (v.14). In other words: do bring children to the sermon (but at the same time: preach so that the little ones can understand it as well).

The Baroque pulpit was dismantled in about 1874, but most parts of it remained on the spot. The reliefs of the tub were incorporated in the present crossingThe central point of a church with a cruciform floor plan. The crossing is the intersection between the longitudinal axis [the choir and the nave] and the transverse axis [the transept]. altarThe altar is the central piece of furniture used in the Eucharist. Originally, an altar used to be a sacrificial table. This fits in with the theological view that Jesus sacrificed himself, through his death on the cross, to redeem mankind, as symbolically depicted in the painting “The Adoration of the Lamb” by the Van Eyck brothers. In modern times the altar is often described as “the table of the Lord”. Here the altar refers to the table at which Jesus and his disciples were seated at the institution of the Eucharist during the Last Supper. Just as Jesus and his disciples did then, the priest and the faithful gather around this table with bread and wine. in 1998. The four corner panels consist of angel heads with six wings, the main reliefs include busts of two Dominicans: SaintThis is a title that the Church bestows on a deceased person who has lived a particularly righteous and faithful life. In the Roman Catholic and Orthodox Church, saints may be venerated (not worshipped). Several saints are also martyrs. Dominic and the great scholar, Thomas Aquinas. Further there is the coat of arms of the order and a shield with a few attributes of the founder of the order: the dog with the torch and the globe, a lily and a pilgrim’s cane (with a hook for the gourd).

A church for sermon, confession and music
The Confessionals
The (main) organ
The cycle of Paintings The Fifteen Mysteries of the Rosary
Surprising mural paintings and a puzzling inscription