The Calvary garden: on a pilgrimage 'round the corner' 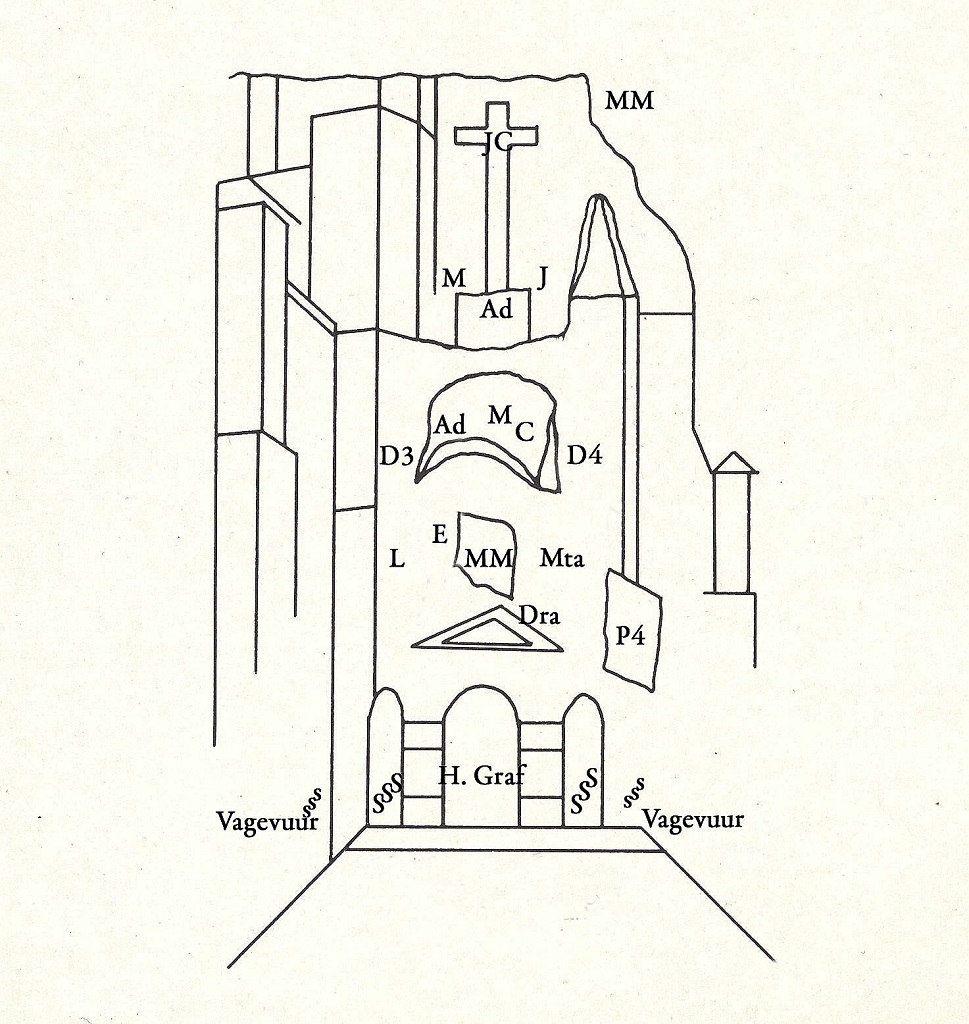 To testify to Jesus’ gruesome passion angels at both sides of the path show the visitor the tools of the passion. The positioning of these heavenly ‘squires’ was inspired by Bernini’s Ponte Sant’Angelo (1669), which Dominicus van Ketwigh admired during his stay in Rome from 1714 till 1716. The tools have been distributed as follows: crown of thorns (E1), (cloth with) the 5 wounds (E2), the inscription INRI on the cross and a sponge (E3), the seamless robe (which was diced for) and the dice (E4), the cross (E5), the ladder (E6), the shroud (E7), the scourge and the ropes (E8), the (alleged) cloth of Veronica (E9), whipping post and the crown of thorns, glove, nails, scourge and dice (E10). The angels show their grief: they look sad and some are weeping.

Jesus’ suffering is also depicted in the 4 medallions (Willem Ignatius Kerricx, 1741) against the church wall. Together with the calvary they constitute the 5 Sorrowful Mysteries of the Rosary. The remarkable idiosyncrasy that Mary is present in every scene should not surprise us too much since both the commissioner and his brotherA male religious who is not a priest. Jan Baptist had been great promoters of the daily devotion of the rosary since 1703. Each mystery is accompanied by a poem. 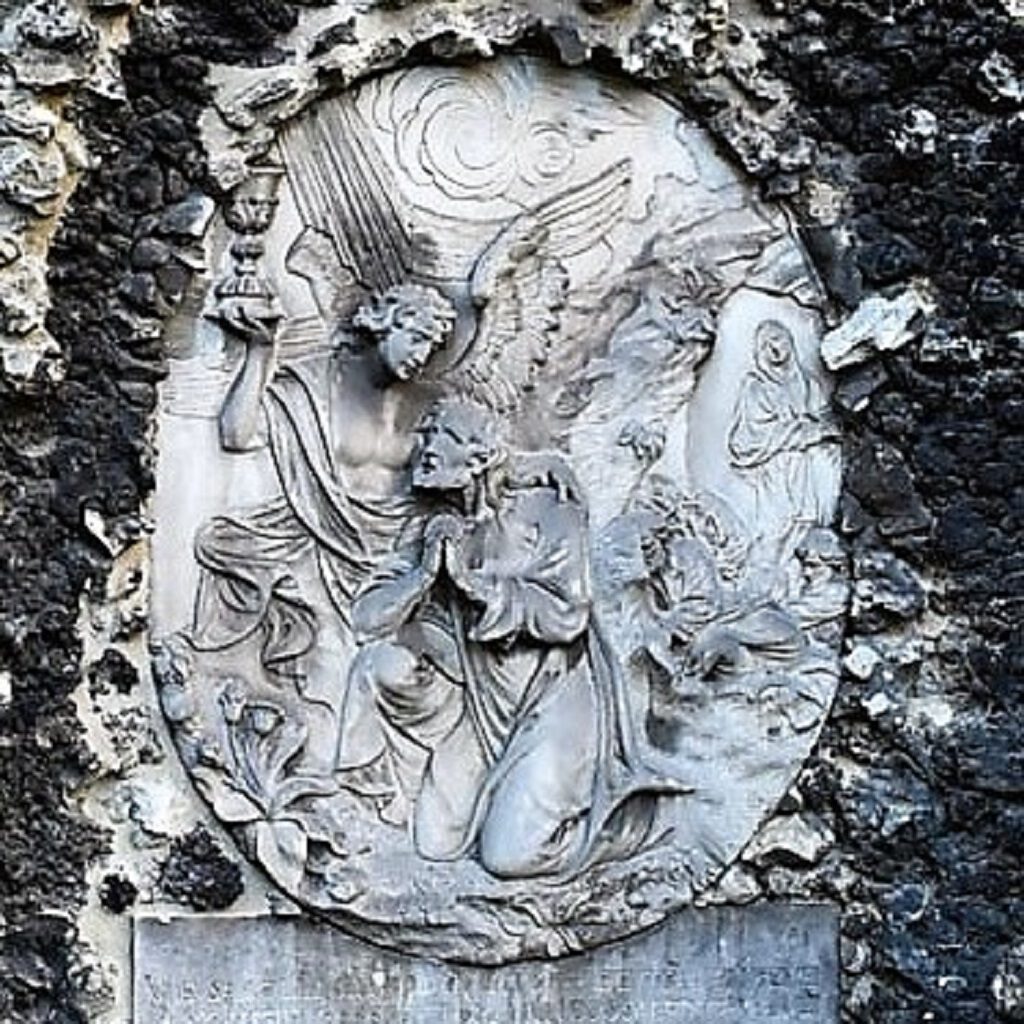 WHO WILL O DEAR GOD
MY SOUL GIVE TEARS
WHEN I SEE THEE SADDENED
FOR MY MALICIOUS LIFE
WHEN I SEE THEE DISTRESSED
AND SWEAT BLOODY SWEAT
THEN I SHOUT WITH REPENT
MY SINS ARE MY SUFFERING.

O SWEET INNOCENT LAMB
TIED TO A COLUMN
SHRED AND TORN
AND THIS FOR OUR SINS.
I HOPE THAT THY BLOOD
WILL SAVE MY SOUL
BECAUSE I LOVE THEE GOD
ABOVE ALL. 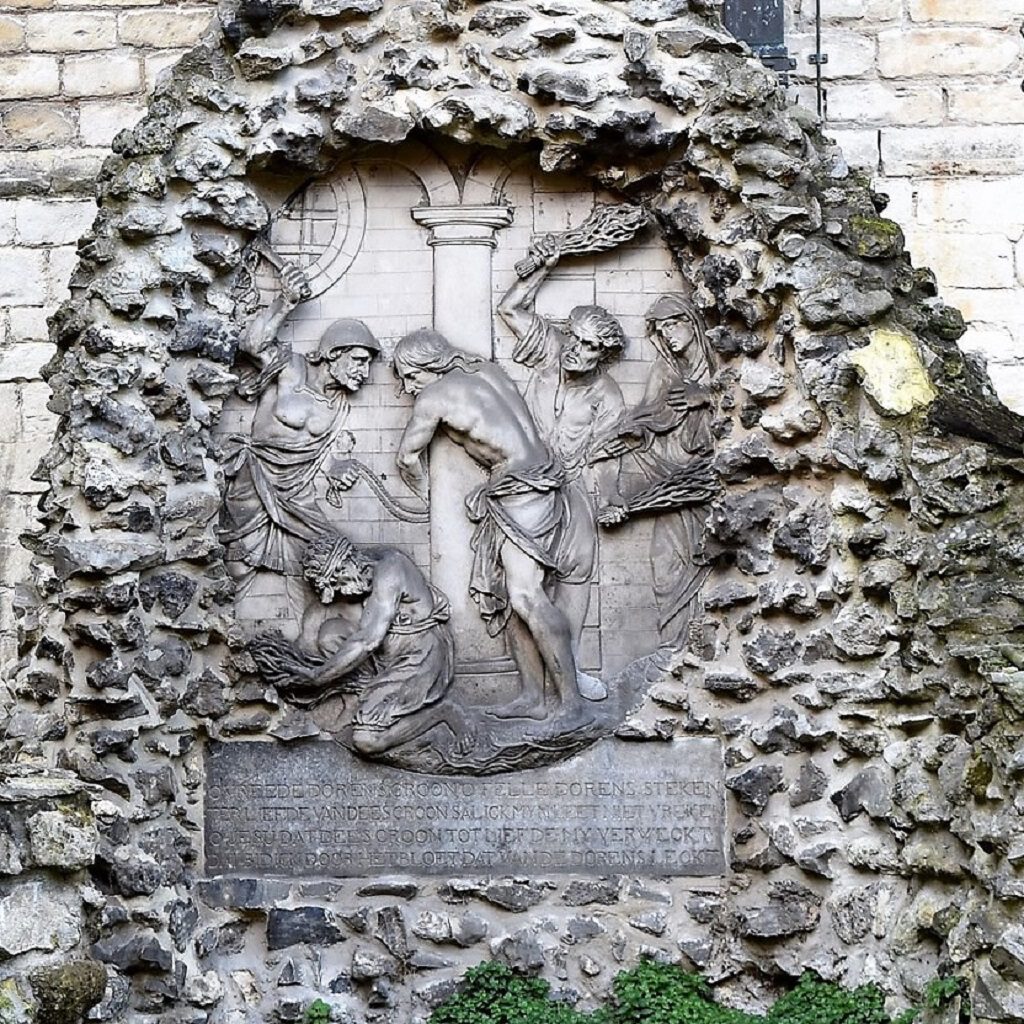 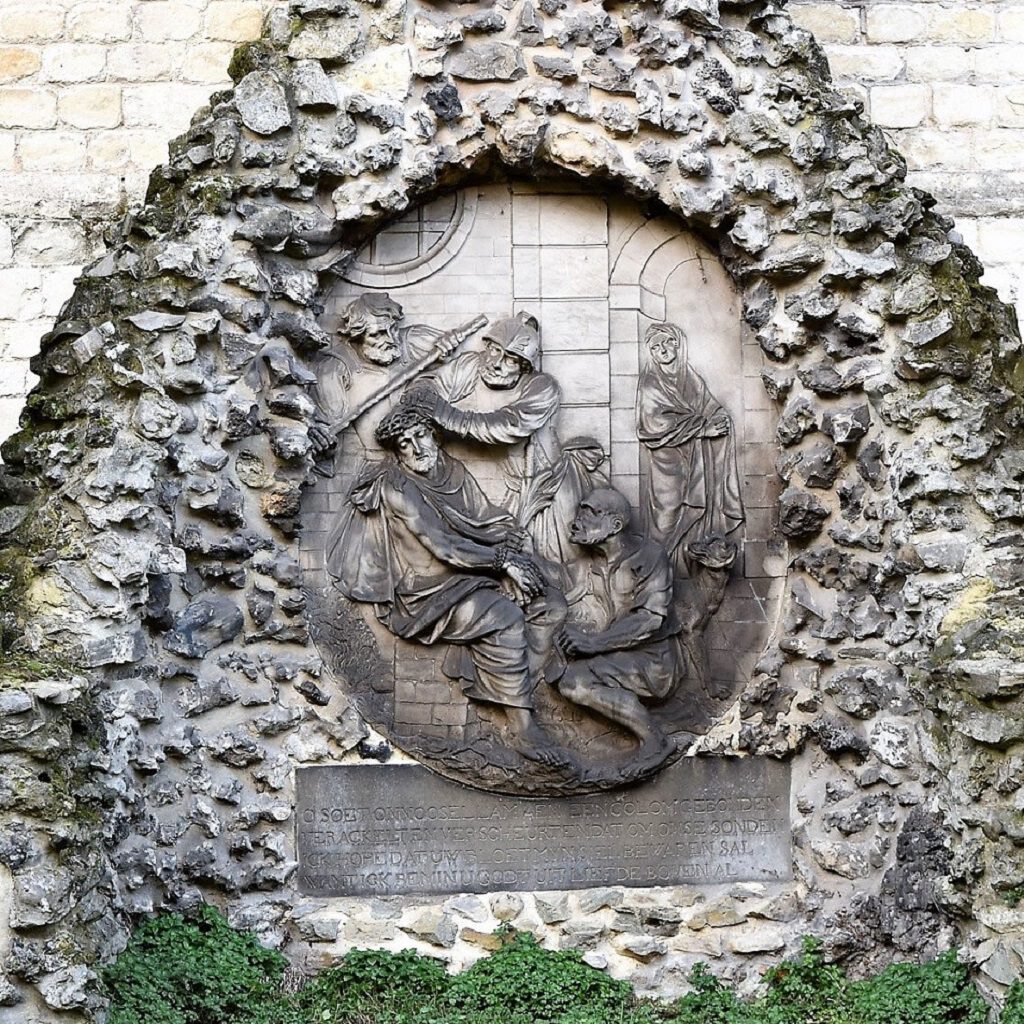 O CRUEL CROWN OF THORNS
O BRIGHT STABBING THORNS
OUT OF LOVE FOR THIS CROWN
I WILL NOT AVENGE MY SUFFERING
O JESUS MAY THIS CROWN
PROVOKE ME TO LOVE
THIS IS MY PRAYER THROUGH THE BLOOD
LEAKING FROM THE THORNS.

WILL I O SWEET JESUS
STILL COMPLAIN IN MY SUFFERING
AS I SEE THEE WITHOUT BLAME
WILLINGLY CARRY THY CROSS
AH SAD MOTHER OF GOD
HOW GREAT WAS THY SORROW
MAKE THAT TRUE REPENTANCE
CRUSHES MY SINNY HEART. 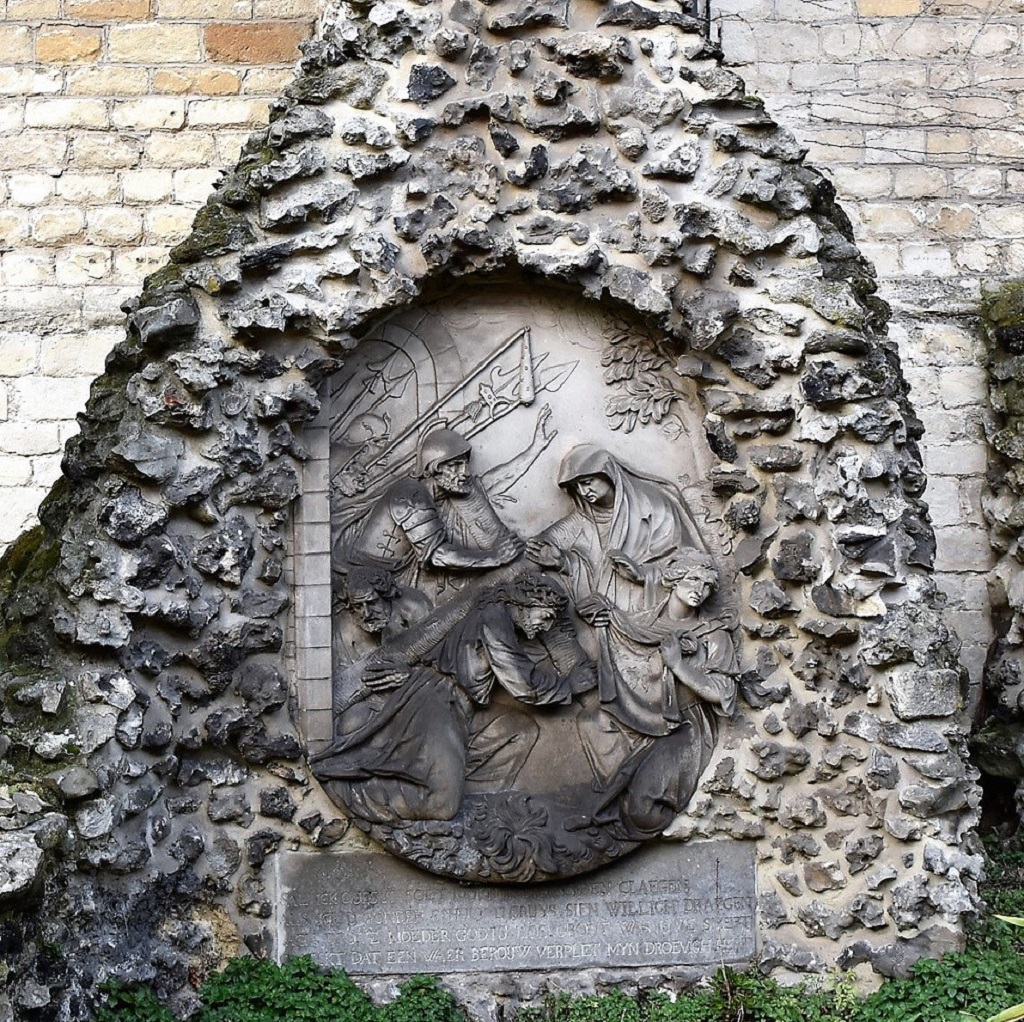 Peter (A1), in a cavern right of the tomb, is tortured by remorse because of having denied Jesus. This is symbolized by the crowing rooster above him. He has put the keys of the Kingdom of Heaven on the ground and he is on his knees, humbly asking to be forgiven.

By representing Jesus’ crucifixion high on top of this steep hill, the cross becomes somewhat triumphant. The skulls at the foot of the cross refer to the name of the spot: ‘Calvary’, i.e. ‘Place of skull’.

True to tradition His mother and His beloved disciple John, respectively (iconographically) right and left of Him, flank the cross. Mary (M) looks up at her Child; John (J) points Him out to us. Because according to Jewish tradition Adam was buried near Mount Calvary, just outside Jerusalem, Christians welcomed this fact to represent Adam’s skeleton (Ad) as a symbol of death at the foot of the cross, which stands for (hope for) eternal life. The same (old) Adam, naked, and with the shovel of his labour (Ad) is here looking up as a living person at the ‘new Adam’, as Jesus Christ is being called (Rom. 5:14-21, especially Cor. 15:22,45-49)

In a cavern underneath the cross, Mary (M) is holding her dead Son (JC) on her lap and mourns over Him: the Pietà. Jesus’ sacrifice of love is symbolically repeated by the pelican that in the last resort opens its chest to give its innermost parts to its young so that they may be fed and can survive.

Jesus’ lifeless body (Willem I Kerricx) lies in state movingly ‘true to life’ in the cave on the ground floor: the Holy Grave. The Roman soldier Longinus (V3), who pierced Jesus’ heart, belongs rather to the Calvary on top of the hill, but here he actually represents the sentry by the tomb.

Finally Jesus’ resurrectionThis is the core of the Christian faith, namely that Jesus rose from the grave on the third day after his death on the cross and lives on. This is celebrated at Easter. has been brought into vision ‘live’ (by Michiel I van der Voort): He (JC) meets Mary Magdalene (MM) in the garden – the gospelOne of the four books of the Bible that focus on Jesus’s actions and sayings, his death and resurrection. The four evangelists are Matthew, Mark, Luke, and John. ‘Gospel’ is the Old English translation of the Greek evangeleon, which literally means ‘Good News’. This term refers to the core message of these books. of the day of EasterThe feast that celebrates the resurrection of Jesus on the 3rd day after his death on the cross. This means that Jesus lives on despite his death. This feast is celebrated on the 1st Sunday after the 1st full moon of spring. (John 20:14-17). She was the crown witness of that great mystery, namely that He has overcome death. Initially she thought that He was the gardener, which accounts for His spade. When she recognized Him, from her disbelief she wanted to touch Him, but she was told: “Do not touch Me” (‘Noli me tangere’, which is the traditional name for this scene). Awe struck she slightly kneels and crosses her arms.

The four evangelists, who have put the account in writing, are at the side of the garden opposing the church wall. They can be recognized by their winged symbols and their writing materials. John (Ev2) and Luke (Ev3) are writing; Matthew (Ev1) is looking up to Heaven. Mark (Ev4) is holding a scroll on which we can read the first verse of his gospel.

The two most important apostles (A), Peter and Paul, are part of the right row of angels. They can be recognized by their physiognomy and their respective attributes – two keys and a sword – and both of them are holding a scroll.

In Peter’s (A1) one can read from his first letter:

On Paul’s (A2) scroll we can also read from his letters:

Further all prophets make their appearance, the ‘major’ (P) and the minor (p) ones, to announce Jesus’ sacrifice of love on Mount Calvary with one of their quotations and in Dutch too.

That the Dominicans had a great liking for Mary Magdalene (MM) can be concluded from her being present no less than three times, including the apparition to her on Easter morning. The reason is that Mary Magdalene, who is identified with several characters of the New TestamentPart of the Bible with texts from after the birth of Jesus. This volume holds 4 gospels, the Acts of the Apostles, 14 letters of Paul, 7 apostolic letters and the Book of Revelation (or Apocalypse)., including the sister of Lazarus and Martha, was the patron of the Dominican third order in the Southern Low Countries (until the beginning of the 19th century). This patronage is linked with the history of the order, which served the place of pilgrimage Sainte Baume until it was destroyed during the French Revolution. The legend says that after Mary Magdalene had gone ashore in Saintes-Marie-de-la-Mer, together with Lazarus and Martha, she retreated in ‘Sainte-Baume’, filled with remorse over her sinful life (‘baoumo’ is Provençal for ‘cave’). On the first platform of the ‘hill’ she is flanked by her brotherA male religious who is not a priest. and sister, while she lies meditating about the extremes as a repentant sinner in the cave. For this meditation she uses a skull (and originally also a cross in her left hand). The mysterious peacock-like bird may symbolize her vanity. Her most important attribute is the small vase of costly balm, which she anointed Jesus’ feet with in the house of Simon the Pharisee and which also refers to her intention to embalm Jesus’ dead body on Easter morning. In that cave she lived a life of prayer and solitude for thirty years. According to the legend she was assisted by archangel Michael (E), who, dressed as a Roman soldier and armed with a ferula and flaming sword, chased the dragon (Dra) that lived there. The same fending off powers are attributed to her sister Martha of Bethany (Mta), who is holding a cross in her hand as a weapon. Her brother Lazarus (L), who is blessing as a bishopPriest in charge of a diocese. See also ‘archbishop’., is holding the sword of his decapitation. On their way to the Holy Land many pilgrims also passed by Sainte-Baume, including Jaak Pussens in 1633.

Finally we find Mary Magdalene against the stairs tower, where, true to the legend, seven times a day angels raise her in ecstasy high above the clouds, so that she can hear heavenly music until she may enter Heaven definitively.

The Calvary garden: on a pilgrimage 'round the corner'
The prophets are speaking
Other figures
Sculptures by artist
The treasury
The Veemarkt gate