Our Lady’s CathedralThe main church of a diocese, where the bishop’s seat is. with its unique 123 metre tall ‘Our Lady’s Spire’ is the symbol of Antwerp. Without this Antwerpians’ pride a city view cannot be representative. Many Antwerpians do not care that this tower is part of a catholic place of worship.  Non-Catholics see it rather as a belfry, which is one of its functions anyway.

A cathedral church differs from other churches not because of its size, but because it contains the ‘cathedra’. As the bishop’s chair is mostly in the main church of an administratively or economically principal town, ‘cathedral’ churches were currently conceived magnificently. Nevertheless Antwerp did not have that episcopal function yet when the present cathedral was being built. As the successor of the oldest parish church of Antwerp, Our-Lady’s Church was also a ‘collegiate’ church with a chapterAll the canons attached to a cathedral or other important church, which is then called a collegiate church. In religious orders, this is also the meeting of the religious, in a chapter house, with participants having ‘a voice in the chapter’. of canons daily praying the office in the choirIn a church with a cruciform floor plan, the part of the church that lies on the side of the nave opposite to the transept. The main altar is in the choir.. As a parish church it is at the same time the mother church of the other parish churches. As main church of Antwerp it housed, at least until the French Revolutionary Rule, the most important crafts and guilds with their altars, either in a radiating or choir chapelA chapel along one of the straight side walls of the choir., or against one of the innumerable pillars. This was the actual reason why during the building period in the 15th century the Gothic church was enlarged by adding a 5th and a 6th aisleLengthwise the nave [in exceptional cases also the transept] of the church is divided into aisles. An aisle is the space between two series of pillars or between a series of pillars and the outer wall. Each aisle is divided into bays.. This lends the church its unique vastness. And as if all this was not enough, they wanted to enlarge the church even more to provide in more and larger space for altars, although it was already the largest Gothic church in the Low Countries.

Only in 1559 was Antwerp proclaimed the seat of a dioceseAdministrative area headed by a bishop. In Belgium, there are eight dioceses: Bruges, Ghent, Antwerp, Mechelen-Brussels, Hasselt, Tournai, Liège and Namur. and in the choir of the main church a bishop’s seat was added. The Antwerp diocese, which was abolished in 1801, was re-established in 1961. Also now the cathedral wants to fulfil its mission as the mother church for Catholics in Antwerp and the diocese: a spot where many hope to feel at home and secure, not only under the vaultings, but – even more – from this prayer to God, the Lord of all Life:

“I will abide in thy tabernacleA small cupboard in the choir or in a specially designated chapel in which the consecrated hosts are kept. forever,
I will trust in the covert of thy wings”
(Ps. 61:4) 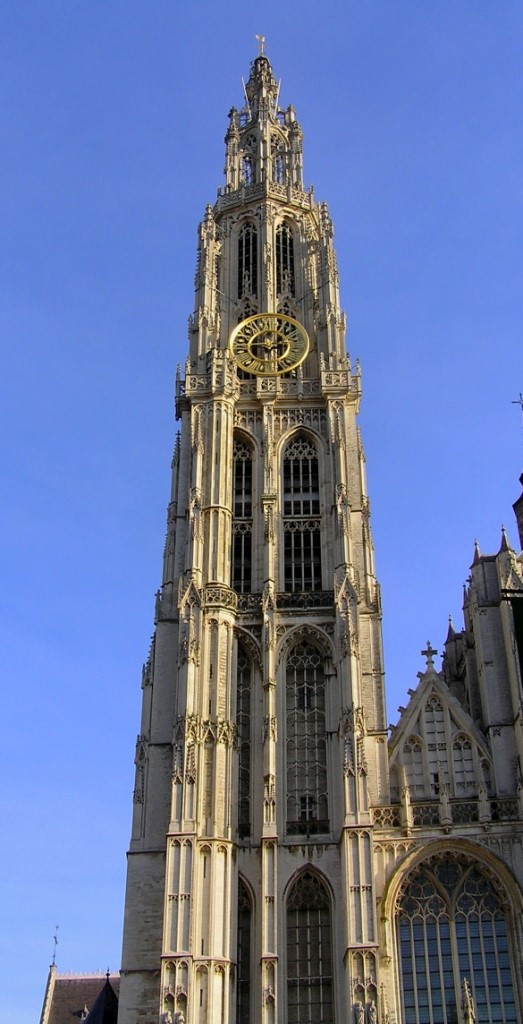 A CathedralThe main church of a diocese, where the bishop’s seat is. never stands alone. Through secularization and modern urbanization we forget that in the past a lot of social functions were controlled and carried out only by the church. There was the care for education in the so-called Papenschool, for singing in the Choraelhuys (Choral house), for the poor at the Table of the Holy SpiritThe active power of God in people. It inspires people to make God present in the world. Jesus was ‘filled with the Holy Spirit’ and thus showed in his speech and actions what God is like. People who allow the Holy Spirit to work in them also speak and act like God and Jesus at those moments. See also ‘Pentecost’., for the sick in Our Lady’s Hospital, and for the dead in the churchyards, one of which was the present-day Groenplaats. Later the Bishop’s Palace, a public library and the diocesan seminary followed. When, on a summer Monday evening, the carillon plays, you realize how much this church is part of the local scene and the hustle and bustle of the city. 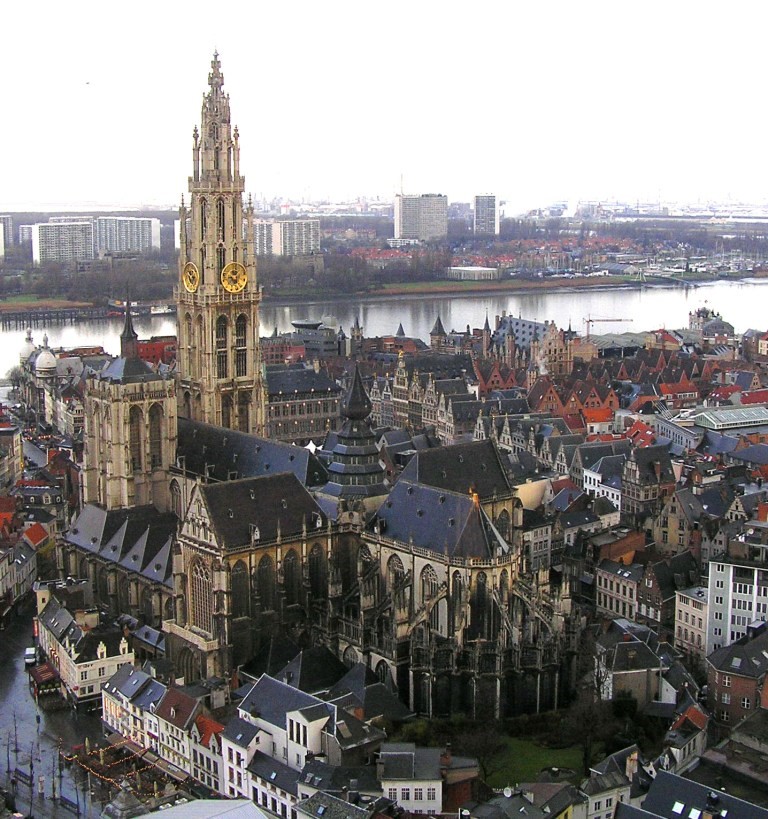 The history of the largest Gothic church in the Low Countries started in 1124. An old chapel
A small church that is not a parish church. It may be part of a larger entity such as a hospital, school, or an alms-house, or it may stand alone.
An enclosed part of a church with its own altar.
became a parish church, which resulted in a respectable church in Romanesque style. In its turn, from 1352 onwards, it was replaced, by the present-day Gothic church. It took 170 years to finish it in its contemporary form. But at a time when Antwerp was the third largest city in Europe, people dreamt of more. The church, which can be counted among the largest on earth with a length of 119 m, a roof surface of more than 1 hectare and 128 windows, was to be extended – worthy of a world exhibition. Till today the layout of the streets on the eastern side of the church is defined by this mighty dream, which collapsed at the catastrophic fire of 1533.

Although the size of the church did not increase, its hierarchical status did, as some years later, when the Antwerp dioceseAdministrative area headed by a bishop. In Belgium, there are eight dioceses: Bruges, Ghent, Antwerp, Mechelen-Brussels, Hasselt, Tournai, Liège and Namur. was established, it was chosen as the bishop’s church. It is this ‘cathedra’ that has made it a ‘cathedral’, which however did not the least impress the Calvinist organizers of the iconoclasms (1566 and 1581). Following the catholic reconstitution in 1585 a new art loving wind in the spirit of the Counter-Reformation blew in: the Baroque with its grandmaster, Rubens.

During the French period, at the end of the 18th century, the church was completely emptied. There was even a menace of complete demolition. Fortunately city architect Jan Blom was able to delay these plans. A complete refit followed in the 19th century: old furniture was bought from abolished (monastery-) churches; new furniture was ordered in Neoclassical and afterwards mostly in neo-Gothic style (the monumental choir stallsA series of seats, usually in wood, along the long sides of the choir. These seats are reserved for those who pray and sing the choir prayers., several side altars and enclosed porches). In 1961 Antwerp became an autonomous diocese again. The government of the province of Antwerp decided an in-depth restoration of the cathedralThe main church of a diocese, where the bishop’s seat is., a gigantic project that is still going on. It was also an opportunity for archaeological research – resulting in the excavation of a great variety of objects! 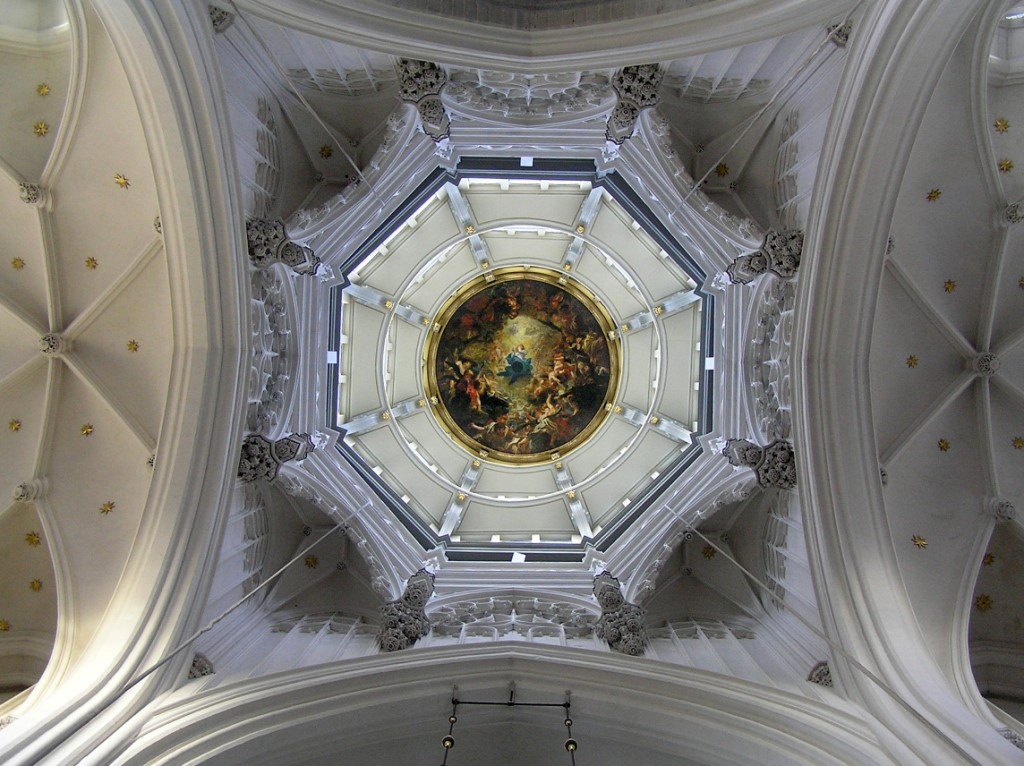 Inside, you find yourself in an extra-ordinarily vast space comprising seven aisles with 48 pillars: a petrified forest. It is this spacious effect that makes Antwerp CathedralThe main church of a diocese, where the bishop’s seat is. so special. In the Cathedral you find a big slice of Antwerp history brought into vision, from the first missionaries who welcome you at the main gate, to the monarchs who tried to have themselves immortalized in colourful stained-glass windows. The ordinary being who had to work for his daily bread recognizes himself best by the pride with which the tools of their crafts were represented on the vault paintings: a sublime homage to the human labour, which is praised to heaven! 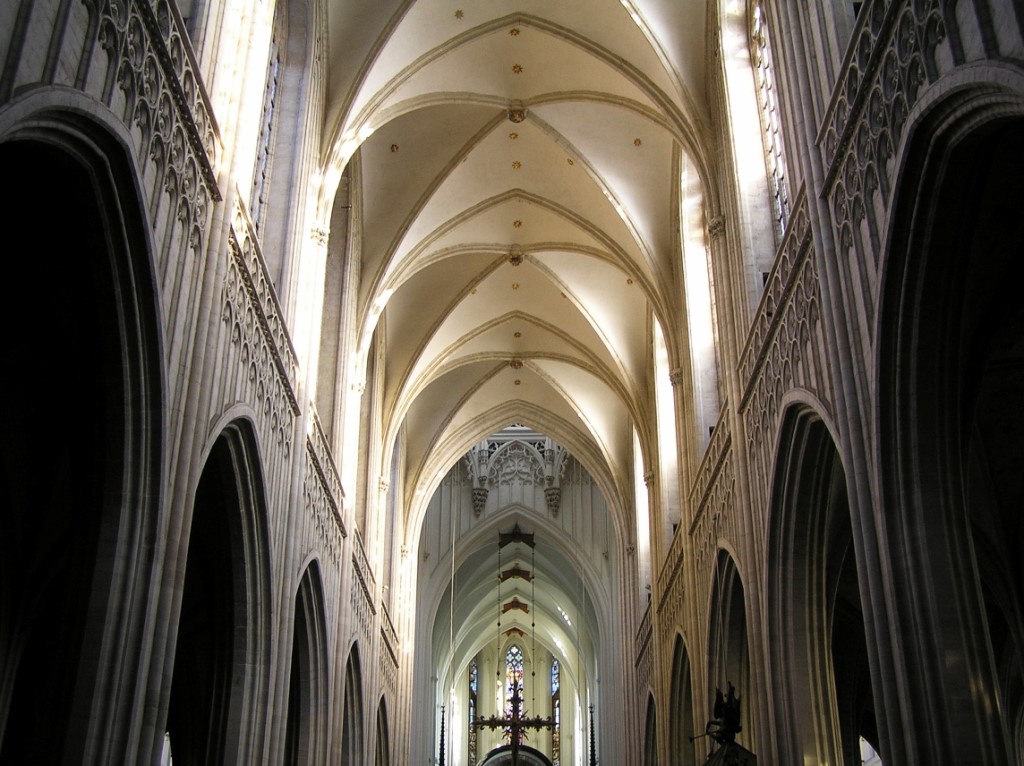 The cathedralThe main church of a diocese, where the bishop’s seat is. houses numerous objects of interest, including the amazing pulpit (Michiel van der Voort, 1713) preaching the Christian message to the four continents. Even birds and squirrels listen along. Could the matchless beauty of this cathedral also be proclaimed with more conviction to the world?

The CathedralThe main church of a diocese, where the bishop’s seat is. is best known for the paintings by Rubens such as the ‘Raising of the Cross’ and the ‘Descent from the Cross’, moving theatrical scenes that invite you once again to experience  the tragedy of Jesus’s suffering and death. These world famous creations by Rubens with their splendid colours and typical diagonal Baroque composition are certainly no ‘art for art’s sake’.