A short guide for a visit

Dear visitor, welcome to our ‘prestigious’ parish church. We hope that once you have left the stress of Antwerp’s shopping streets behind you, you will feel at home in this fascinating ‘house of God’. In this monumental church, where impressive Gothic architecture and amusing Baroque art go surprisingly well together, you may enjoy endless beauty and everything that is permeated by God’s eternal love.

The artistic importance of this church is due to the unbelievable richness of Renaissance and Baroque art: there are for instance 24 altars with almost as many paintings. But even more spectacular is the exuberant Baroque sculpture art, e.g. the high altar, communion-rails and funeral monuments. Finally, the memorial chapel of great master Peter Paul Rubens makes this church a must for every tourist. The actual restoration is to be completed by 2027.

As in many European cities, the history of Antwerp St James’s church started here in the 14th C. outside the city walls as a guest house for pilgrims from the north of Europe who were on their way to the tomb of the apostle James in Santiago de Compostella. In 1415 the guild of Saint James added a chapel. Still today, pilgrims come here to ask a blessing for their journey. They are given a pilgrimage booklet which is stamped at every visit to a Saint James sanctuary. Once arrived in Compostella they receive a shell to hang around their neck as a sign of their pilgrimage. You can find this and other travel attributes like the staff, calabash, hat, and cape incorporated in the decora-tions of the tower, as on a house at the corner of Lange Nieuwstraat, and in the church as a whole. 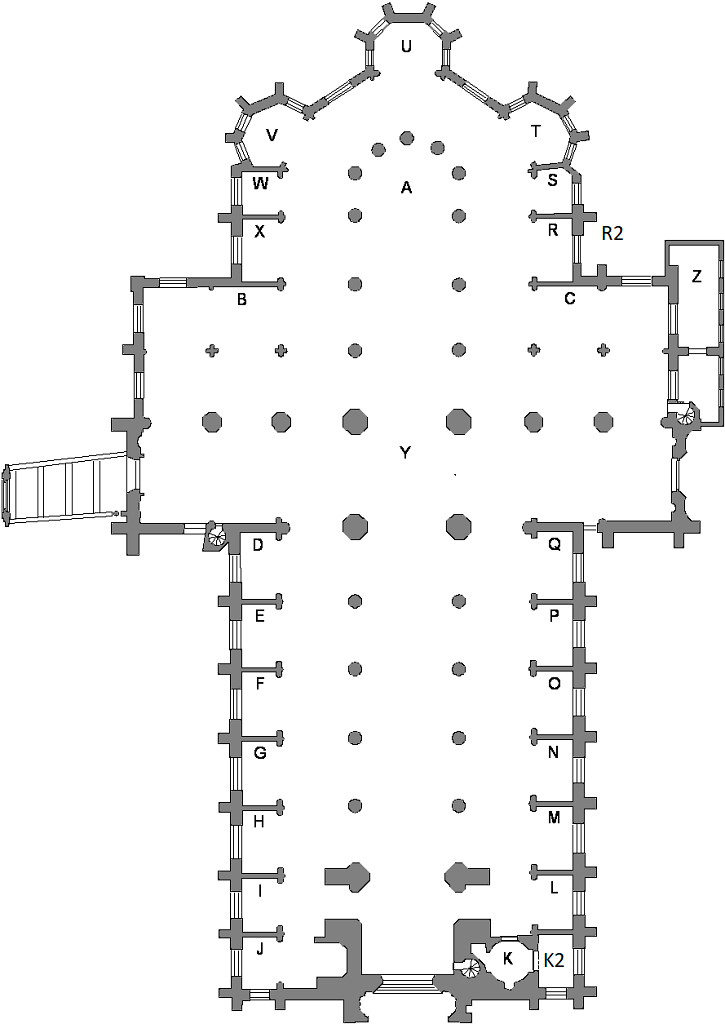 ♦ In 1476, 15 years after the chapel had been promoted parish church, construction of the actual church started in the Brabantine Gothic style. Thanks to a row of chapels next to both aisles there is a three-dimensional effect that is unique in Antwerp. The strong pillars are even more conspicuous. For reasons of stability and for unity in style, the builders continued the eastern part with the choir and the ambulatory in Gothic style, although it was the first half of the 17th C., in the full Baroque period. Even Baroque master P. P. Rubens received a memorial chapel in Gothic style (⇒ U).

♦ The universal temptation to always have more, and thus build ever taller, stimulated the builders to have (only) one tower that would place into shadow even the tall tower of Our-Lady’s Cathedral. However, in the end, only one third of this 150 m tall dream was realized. Despite this frustration, St James’s church has a strong solid tower, which has not only been an essential part of Antwerp’s skyline for already 500 years, but which also functions as a surprise effect in the maze of narrow streets of the old centre.

♦ As a parish church St James’s church too – just like Our Lady’s Cathedral – offered a place for the chapels of some smaller corporations, such as the peat bearers (⇒ E) and the silk workers (their triptych: ⇒ L). The musicians, around the figure of the miserable Job, show their inspiring wind as well as string instruments (⇒ O).  Some of the corporations chose their patron saints as professional role models; St Ivo, who defended the poor ‘pro bono’, for the lawyers (⇒ S), St Joseph for the carpenters (⇒ G).

Besides, many confraternities used to practice their devotion in their own chapels. So did the brotherhood of the Holy Trinity, which raised money to free Christian slaves in North Africa (⇒ R). The most prestigious confraternities, those with the largest chapels, are still active: the one of the Blessed Sacrament (⇒ C), and the one of Our Lady (⇒ B).

♦ (⇒ A) After the choir had been finished, a chapter was established in 1656. Until 1801, the church enjoyed the status of a ‘collegiate’ church, due to the canons of the chapter. Every day, on fixed hours, they would come to the choirstalls to pray and sing in honour of God. Even the flora and fauna join in this hymn as you can notice in the sculpture; the imagination of uncle and nephew Artus I and Artus II Quellin (1658-‘70) is truly magnificent. Everyone’s attention is drawn to the glorification of St James on the flamboyant and triumphant marble high altar (Artus II Quellin and Willem Kerrickx 1685). God sits on his throne under a (wooden) baldachin in the shape of an enormous, open scallop. Another characteristic feature of St James’s church is the 17th C. rood loft (Sebastiaan de Neve), with an organ by the famous Jan-Baptist Forceville (1727), of which the tracker action still functions. Michiel I Van der Voort carved the angels playing music.

♦ Unfortunately, the original Gothic and early Renaissance art pieces are no longer present. They were destroyed in the two iconoclasms of 1566 and 1581. After the Calvinist occupation had ended, the nave was given back to the Catholics in 1585. One altarpiece, The life of Saint Roch (1517), survived these disastrous annihilations (⇒ K2). The revival of Catholic faith created an enormously rich Baroque artistic patrimony, as for instance a plenitude of different marbles. The fact that almost everything in St James’s church has been preserved is exceptional. This is thanks to a priest who was loyal to the French revolutionary rule and swore an oath of allegiance to the French Republic. As a sort of reward, he could indicate one church in Antwerp to be spared.
As a result, the treasury (⇒ R2) has a host of liturgical tools, both silversmiths’ work and textiles. Still the destruction of most stained windows by V-bombs (which landed in the area) at the end of the WW II was a tragic loss for the church. In the 1960’s most of them were renewed by Oscar Calders after a design of Louis-Charles Crespin. Fortunately the oldest window (ca. 1535), The Last Supper in St Hubert’s chapel (⇒ E) survived.

♦ (⇒ C) In the Chapel of the Blessed Sacrament you can admire the beauty of Baroque sculptures at their highest level. In a panel at the left of the altar (Lodewijk Willemssens and Petrus I Verbruggen, 1690) an altar boy with jingling sacring bells calls the attention for the consecration. Particularly attractive are the communion rails, which were designed by Willem Kerrickx and Hendrik Verbruggen in 1695. The rails were so realistically carved that one almost forgets that they are made of marble. Angelic altar boys adore Jesus in the appearance of bread and wine with the appropriate gestures and they recognise Him in the real Lamb of God.
The stained glass window shows a marvellous green landscape. This masterpiece by Jan de Labaer (1626) represents, in several scenes, the story of Rudolf of Habsburg, who was willing to offer his horse to a priest so that he could administer the last sacraments and Holy Communion to a dying person.

♦ (⇒ B) Our Lady’s chapel – Since 1664 Our Lady has been masterly honoured between the helical columns of the altar by Sebastiaan van den Eynde. Once the Confraternity of the Dejected Mother (= The Sorrowful Mother) flourished here by the devotional statue The Piëta (Artus II Quellin, 1650). Since the 19th C Our Lady – Auxiliary of the Christians has been on the altar. The two magnificent stained-glass windows show happier moments in her life: The Annunciation (to Mary) and The Visitation of Mary to her cousin Elisabeth (Jan de Labaer, 1629 and 1644).
Have you ever seen a pig eating in a church? Take a look at the Prodigal Son. As an example for all converted sinners, he stands near one of the confessionals to support other sinners in finding reconciliation.

♦ St James’s is rich in memorial monuments because it used to be the parish church of many upper-class people in the 17th and 18th C. Some other monuments were placed in the 19th C.
(⇒ E) Do you feel compassion with the mother who ordered a portrait statue for her dead son, a Carthusian monk? The young monk with the shaved head is concentrated ‘in the eternal adoration’.
(⇒ H) What do you think of Mr Cornelis Lantschot, who was so confident about a place in heaven because of his many alms and his ‘powerful’ prayers?
(⇒ I) Did you ever see a strategist who, despite his genius and his impressive arsenal, still has to surrender to the one last enemy, death itself? Indeed, Don Francesco Marcos Del Pico, the marquis of Velasco, once governor of the citadel, doesn’t present himself as a very important person (VIP) any longer, but shares the final destiny of all mortals.

Some fortunate 17th C. families paid for private memorial chapels.
(⇒ U) The most famous among them is that of the family of P.P. Rubens (Our Lady’s chapel, in the eastern part of the church). This chapel was completed in 1645, five years after his death. Rubens himself dedicated the painting Our Lady Surrounded by Saints – which for reasons unknown never reached its original destination – to his own memorial chapel. So, don’t look for portraits of his relatives, nor of himself here. On the occasion of Rubens’s demise, a clergyman testified: “Now he has gone to the original of several beautiful paintings that he has left us.”
(⇒ V) The Carenna family of Milanese origin chose Saint Charles Borromeo of Milan, represented as patron saint of the plague-ridden by Jacques (‘James’) Jordaens.

♦ The tub of the pulpit, made by Lodewijk Willemssens in 1675, is carried by allegoric figures. In the middle is Faith, the important virtue, supported not only by Truth but also by Theology as the intellectual side of it. Faith must be proclaimed in preaching to instruct the people, but always in full respect of the truth. Almost hidden under the stairs Instruction holds up a mirror with the text: “Look here and you’ll become wiser.” Teachers aim to inspire people by having them reflect about famous model figures that can be an example in a particular field. The question is always: “Who is my model?”

♦ And it is from the lower open level of the tower that the monumental Anneessen organ (1884) has its sound reverberated in the church.

♦ The church received the honour of the title ‘prestigious collegiate’ given to the chapter by pope Clemens XI in 1705. With the chapter that title was abolished in 1801. However, people are more than impressed by all the richness and the beauty. At the end of the 19th C., a German visitor described Saint James’s church as follows: “the richest church of the Germanic countries should be in Venice”. Well, even though the Antwerp chauvinists have enjoyed that compliment, they of course prefer to keep Saint James’s church close to themselves.