The Chapel
A small church that is not a parish church. It may be part of a larger entity such as a hospital, school, or an alms-house, or it may stand alone.
An enclosed part of a church with its own altar.
of the Holy SacramentIn Christianity, this is a sacred act in which God comes to man. Sacraments mark important moments in human life. In the Catholic Church, there are seven sacraments: baptism, confession, Eucharist, confirmation, anointing of the sick, marriage and ordination.
and of the Sweet Name of Jesus

The altarpiece “The Lamentation”

The canvas (probably 1654) has been ascribed to Gaspar De Crayer, but Huybrecht Dirix is also being mentioned. Jesus’ three beloved ones – his mother Mary, the beloved disciple John and Mary Magdalen – lament over his dead body. The symbolism of their clothing here shows the trio of the primary colours: red, blue and yellow. One of the angels in tears, on the right, points at the sharp bloody point of the lance Jesus’ heart was pierced with. Another one, in front of him, is holding the crown of thorns. The trilingual cross inscription is completely in the foreground on the left. 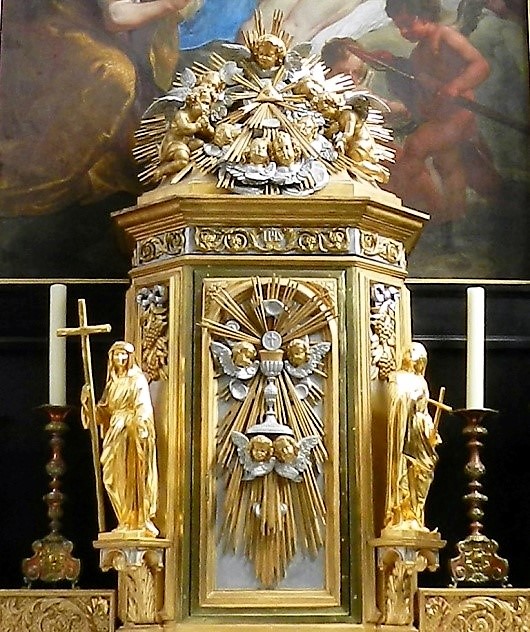 Two divine virtues flank the wooden trunk (19th century) painted ‘gold’. The first one, on the left, is (Christian) Faith, with Jesus’ cross and a chaliceGilded metal cup, usually on a base, which the priest uses for the wine during the Eucharist. with above it the consecratedIn the Roman Catholic Church, the moment when, during the Eucharist, the bread and wine are transformed into the body and blood of Jesus, the so-called transubstantiation, by the pronouncement of the sacramental words. hostA portion of bread made of unleavened wheat flour that, according to Roman Catholic belief, becomes the body of Christ during the Eucharist., the EucharistThis is the ritual that is the kernel of Mass, recalling what Jesus did the day before he died on the cross. On the evening of that day, Jesus celebrated the Jewish Passover with his disciples. After the meal, he took bread, broke it and gave it to his disciples, saying, “Take and eat. This is my body.” Then he took the cup of wine, gave it to his disciples and said, “Drink from this. This is my blood.” Then Jesus said, “Do this in remembrance of me.” During the Eucharist, the priest repeats these words while breaking bread [in the form of a host] and holding up the chalice with wine. Through the connection between the broken bread and the “broken” Jesus on the cross, Jesus becomes tangibly present. At the same time, this event reminds us of the mission of every Christian: to be “broken bread” from which others can live.. Next is Hope, with an anchor, because in every storm sailors hope they will be able to come to anchor again safe and sound. Their presence and their order are due to a quotation from Saint PaulOriginally, he was called Saul, he was a Jew with Roman citizenship and a persecutor of Christians in the period shortly after the death of Jesus. After his conversion, he became the main gospel spreader in what is now Turkey and Greece. He wrote letters to keep in touch with the Christian communities he had founded, and these texts are the oldest ones in the New Testament. Although he never met Jesus, he is called an “apostle”.: “So faith, hope, love remain, these three; but the greatest of these is love.” (1 Cor. 13:13). As it is the “greatest” of the three Love has been given the place of honour in the centre. It is represented by the chalice and the hosts that decorate the little door, to remind us of the fact that the (real) hosts are being kept here, in other words the Holy SacramentIn Christianity, this is a sacred act in which God comes to man. Sacraments mark important moments in human life. In the Catholic Church, there are seven sacraments: baptism, confession, Eucharist, confirmation, anointing of the sick, marriage and ordination., the sign of Jesus’ loving willingness to sacrifice himself, which is relived again and again in the broken bread in massThe liturgical celebration in which the Eucharist is central. It consists of two main parts: the Liturgy of the Word and the Liturgy of the Eucharist. The main parts of the Liturgy of the Word are the prayers for mercy, the Bible readings, and the homily. The Liturgy of the Eucharist begins with the offertory, whereby bread and wine are placed on the altar. This is followed by the Eucharistic Prayer, during which the praise of God is sung, and the consecration takes place. Fixed elements are also the praying of the Our Father and a wish for peace, and so one can symbolically sit down at the table with Jesus during Communion. Mass ends with a mission (the Latin missa, from which ‘Mass’ has been derived): the instruction to go out into the world in the same spirit.. ‘Divine’ virtues: what would man be without them?

Also on a gilded wooden 18th century exhibition throne the Holy Sacrament is shown surrounded by the three Divine Virtues. Love, in the middle in front, this time shows a burning heart.