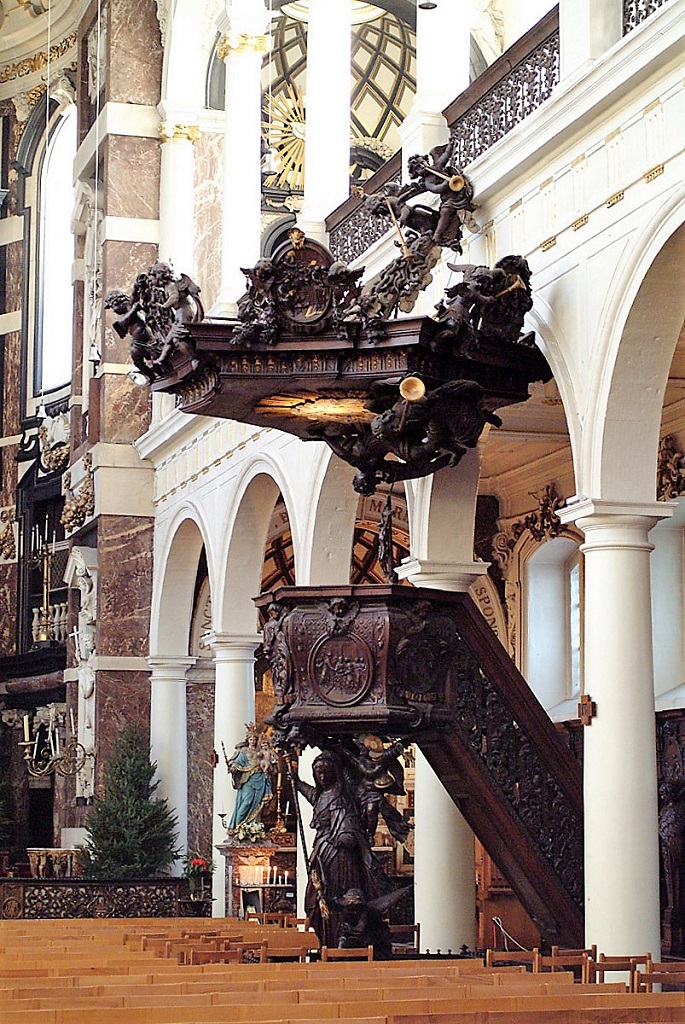 When nowadays you want to reach an adult audience with a message, you can do so through refresher courses, publications, advertising, film, websites, television and the internet. In the 17th and 18th centuries the audience could mainly be reached through giving sermons, in other words giving a religious address in the town of Antwerp the Jesuit fathers were in charge of Sunday homilies in SaintThis is a title that the Church bestows on a deceased person who has lived a particularly righteous and faithful life. In the Roman Catholic and Orthodox Church, saints may be venerated (not worshipped). Several saints are also martyrs. Andrew’s Church, the LentThis is the period of preparation for Easter. It begins on Ash Wednesday and ends on the Saturday before Easter. Without the six Sundays of Lent, there are 40 days in which Christians are expected to live more austerely. The last week of Lent is called Holy Week. meditations in the CathedralThe main church of a diocese, where the bishop’s seat is. and they were asked for all kinds of occasions. Besides they held parochial missions in the countryside and co-operated at the Dutch mission, i.e. the spiritual or pastoral care among the Catholics in the United Provinces, who could not stand up for their faith publicly. Because of this varied practice they caused a special genre of publications to flourish: pulpit literature.

Especially in the first years after 1585 and during the Twelve Year’s Truce (1609-1621), when a lot of Protestant Christians from the North came to Antwerp for the fair, theological disputes dealt with the great differences with the Protestants, such as the EucharistThis is the ritual that is the kernel of Mass, recalling what Jesus did the day before he died on the cross. On the evening of that day, Jesus celebrated the Jewish Passover with his disciples. After the meal, he took bread, broke it and gave it to his disciples, saying, “Take and eat. This is my body.” Then he took the cup of wine, gave it to his disciples and said, “Drink from this. This is my blood.” Then Jesus said, “Do this in remembrance of me.” During the Eucharist, the priest repeats these words while breaking bread [in the form of a host] and holding up the chalice with wine. Through the connection between the broken bread and the “broken” Jesus on the cross, Jesus becomes tangibly present. At the same time, this event reminds us of the mission of every Christian: to be “broken bread” from which others can live. and confessionThe sacrament of reconciliation. The believer [or penitent] confesses his / her shortcomings to a priest [the confessor] and expresses his / her regret. On behalf of God the priest grants forgiveness [absolution] and imposes a form of penance. This may include several prayers, an order to reconcile with the other party or, in the past, sometimes a pilgrimage., worship of the Virgin Mary and hagiolatry.

The present pulpit dates from after the fire (ca. 1720) and is ascribed to Jan Pieter II Van Baurscheit. To have a real impression of such a monumental work a sketch is not sufficient. Therefore, the sculptor will first make a model. The bozetto of the carrying figure in terracotta (80 cm (30,5 in) tall) is kept in the church museum.

The allegory of ‘the Church that triumphs over heresy’ is the supporting base (A) of the tub (B). Because Protestant Christians reject the doctrinal authority of the Church, the Church’s authority is explicitly represented. Notice how – barely visibly – two iron staves go along the two angels left and right and through the hollow statue underneath the tub. The Catholic Church is personified by a female figure in canonicals with the papal ferula (with the triple cross) in her hand. The monsters of lies and ignorance, and also the masks of false appearance are trampled on by the Church. That is what is called ‘to crush heresy’, which is subtitled by the banderol under her feet: “CONFREGISTI CAPITA DRACONIS PS. LXXIII V. 15” (“It was You [God] who have crushed the heads of the dragon [Leviathan]”, Psalm 73 verse 15) (= Ps. 74,14). With her left arm, she lays the biggest monster. Two putti are next to her: sheltering behind a shield they attack both monsters with lightning. On the left putto’s diadem, one can read “GLADIUS SPIRITUS” (the sword of the Spirit) (Eph. 6:17: “i.e. God’s word”) and on the other one’s “SPIRITUS VERITATIS” (The Spirit of truth). Another two floating putti below the tub accompany Church with her attributes. One is carrying the keys of the kingdom of heaven [one key has broken] and a chaliceGilded metal cup, usually on a base, which the priest uses for the wine during the Eucharist. with a hostA portion of bread made of unleavened wheat flour that, according to Roman Catholic belief, becomes the body of Christ during the Eucharist., the other one the papal tiaraA triple crown: a headgear consisting of three crowns placed one above the other. It was worn by popes at official, non-liturgical ceremonies from the beginning of the 14th century until 1964, when Pope Paul VI renounced his tiara in order to sell it in favour of development aid. and a book, symbol of the doctrinal authority of the Church, for instance concerning the interpretation of the Scriptures. On the banderol between the two angels’ heads underneath the tub we can clearly read another text that applies allegorically to the supporting figure: “COLUMNA ET FIRMAMENTUM VERITATIS, 1 TIM. 3;15 (‘the pillar and foundation of truth’ (1 Tim. 3;15): a way to describe “the Church of the living God”)

Underneath the sounding board a banderol between the two trumpeting angels draws Mother Mary into the Counter Reformation battle: “CUNCTAS HAERESES SOLA INTERMISTI” (‘Only you have eradicated all heresies’), a phrase from the liturgy of the Feast of the Annunciation.

The tub (B) contains 6 medallions depicting scenes from the life of Mother Mary.

On the sounding-board (C) the cycle of Mary’s life continues, also in 6 scenes:

Then quite a move is made to the period after Jesus’ lifetime:

The theme that is developed on the tub and the sounding board is the glorification of Mary. The banderols below the tub say it together: “IMMACULATAE VIRGINIS DEIPARAE“ (in honour of the Immaculate Virgin and Mother of God).

Now, what is the link between the life of Mary and the Church triumphing over heresy?

The high altar
The confessionals