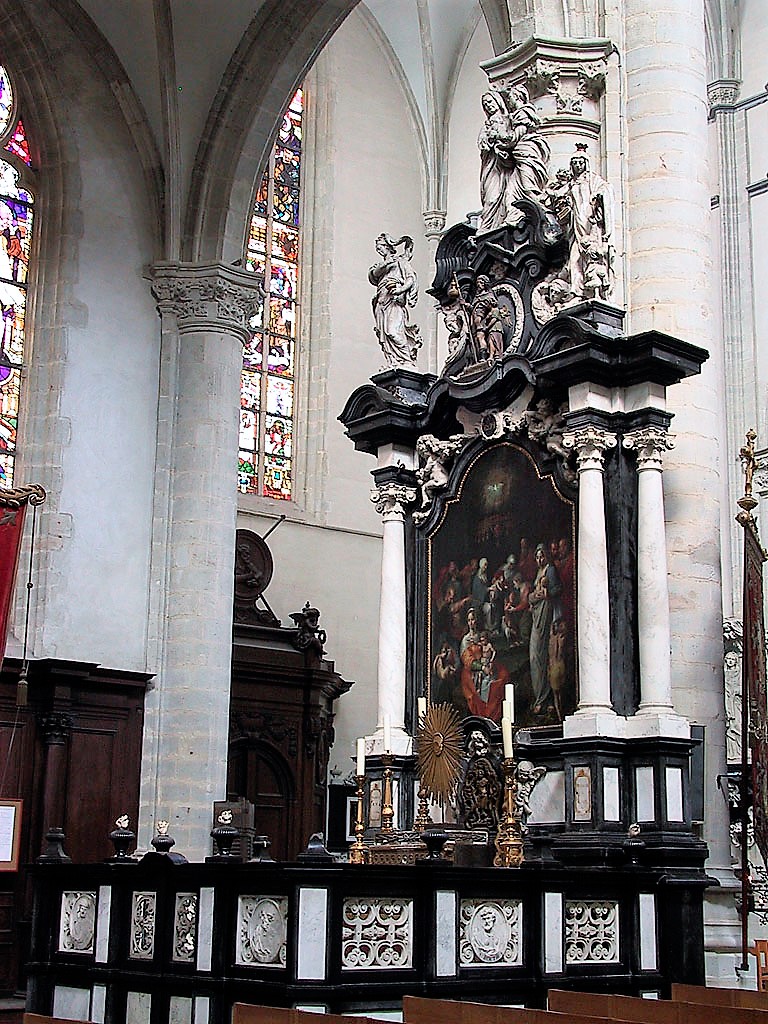 In 1594 a separate altarThe altar is the central piece of furniture used in the Eucharist. Originally, an altar used to be a sacrificial table. This fits in with the theological view that Jesus sacrificed himself, through his death on the cross, to redeem mankind, as symbolically depicted in the painting “The Adoration of the Lamb” by the Van Eyck brothers. In modern times the altar is often described as “the table of the Lord”. Here the altar refers to the table at which Jesus and his disciples were seated at the institution of the Eucharist during the Last Supper. Just as Jesus and his disciples did then, the priest and the faithful gather around this table with bread and wine. for the devotion to SaintThis is a title that the Church bestows on a deceased person who has lived a particularly righteous and faithful life. In the Roman Catholic and Orthodox Church, saints may be venerated (not worshipped). Several saints are also martyrs. Anne was consecratedIn the Roman Catholic Church, the moment when, during the Eucharist, the bread and wine are transformed into the body and blood of Jesus, the so-called transubstantiation, by the pronouncement of the sacramental words. in the then church, probably against a different pillar from the present one in the northern aisleLengthwise the nave [in exceptional cases also the transept] of the church is divided into aisles. An aisle is the space between two series of pillars or between a series of pillars and the outer wall. Each aisle is divided into bays.. Stylistically the current painting can date from that time. In spite of some dispute, it is ascribed to Marten Pepijn (1575-1643).

By ‘The Holy Kinship’ the wider family relations of Saint Anne are meant, a typically medieval theme, which rather emphasized the broader kinship in a time when the individual family was not yet given so much importance. According to medieval tradition Anne successively married Joachim, Clopas and Solomas. From each of these marriages one daughter was born: Mary, Mary of Clopas and Mary Salome. Especially the family ties between grandma Ann, mother Mary and the child Jesus must be understood in the light of God’s providence and this has been illustrated by the allegorical dove of the Holy SpiritThe active power of God in people. It inspires people to make God present in the world. Jesus was ‘filled with the Holy Spirit’ and thus showed in his speech and actions what God is like. People who allow the Holy Spirit to work in them also speak and act like God and Jesus at those moments. See also ‘Pentecost’. on top. On the left Saint Anne and Mary together hold the infant Jesus, who bends towards John the Baptist. The latter’s mother Elizabeth (Mary’s cousin) and her husband Zachariah are also there. In the front and in the back are other members of the family, whose mutual relations are only based on apocryphal traditions. Because of the apocryphal nature of the theme the representation was forbidden by the CouncilA large meeting of ecclesiastical office holders, mainly bishops, presided by the pope, to make decisions concerning faith, church customs, etc. A council is usually named after the place where it was held. Examples: the Council of Trent [1645-1653] and the Second Vatican Council [1962-1965], which is also the last council for the time being. of Trent (1545-1563), but apparently the power of tradition was still too strong here to obey that ‘cold’ ecclesiastic prescription.  And do you not find it touching how in the bottom right corner the dog licks its master?

About ten years after the transepts had been finished in 1663 Jan Van den Cruyce constructed a marble portico altar against the northern crossingThe central point of a church with a cruciform floor plan. The crossing is the intersection between the longitudinal axis [the choir and the nave] and the transverse axis [the transept]. pillar, commissioned by the brotherhood of Saint Anne. The central panel of the old altarpiecePainted and/or carved back wall of an altar placed against a wall or pillar. Below the retable there is sometimes a predella. was incorporated into it. In order to finance the new altar a special polychrome wooden collection plate was made. Originally saints Antony Abott, Roch and Sebastian were also venerated at this altar, three plague saints. People counted on their intercession in times of epidemics so that they could show themselves worthy of this title.

Saint Roch appears in relief on the little door of the reliquaryContainer for relics. Often this is a philatory: a decorated glass holder on a pedestal, in which a relic can be placed for veneration. It is important to know that relics cannot be worshipped, only venerated. in the predellaThe base of an altarpiece. Like the altarpiece, the predella may be painted or sculpted.. His polychrome wooden statue above the retable painting was added in the second half of the 19th (or first half of the 20th) century. It came from one of the innumerable poor alleys that were pulled down.

On the altar crowning an elegant Mary Magdalen seems to be dancing on the left, and on the right Elizabeth of Thuringia in an exemplary way gives a golden coin, which in those days was the largest currency, to a crippled beggar, whose amputated lower leg is resting on a knee crutch.

The black marble altar rails, ascribed to Michiel I van der Voort (ca. 1720), comprise a few decorative white marble panels with in medallions each time the bust of a saint who is venerated at this altar:

A separate statue of Saint Anthony Abbott (17th century) is against the next pillar.