The present, famous, pulpit is not the first one in SaintThis is a title that the Church bestows on a deceased person who has lived a particularly righteous and faithful life. In the Roman Catholic and Orthodox Church, saints may be venerated (not worshipped). Several saints are also martyrs. Andrew’s. The Fugger, the richest Antwerpians ever, with a residence in Steenhouwersvest that had the tallest house tower in the city, largely paid for the former pulpit in their parish church. The octagonal piece of Renaissance furniture, which was manufactured by Filip Terrewin in 1559, has the four evangelists on its corners, and on the side panels among other things the armours of the city and of the patron. The pulpit survived the so-called 1578 iconoclasm because it was useful to the Calvinists, who confiscated the naveThe rear part of the church which is reserved for the congregation. The nave extends to the transept. of the church exactly for that reason. In 1608, during Catholic revival, Otmaer Van Ommeren added a soundboard.

In order to make room for the present pulpit the church board sold the former one. It ended up in the Anglican village church of Cockayne Hatley, which resold it to Carlisle CathedralThe main church of a diocese, where the bishop’s seat is.? in 1963, without the back panel with Saint Andrew. Particular detail: at this last removal some handwritten letters of prayer in colloquial language came to light. It is a pity that such supplications were not kept in Saint Andrew’s, where they belong. Of all relics of the past they express better than anything else the sorrows and joys of those who felt at home in this church. 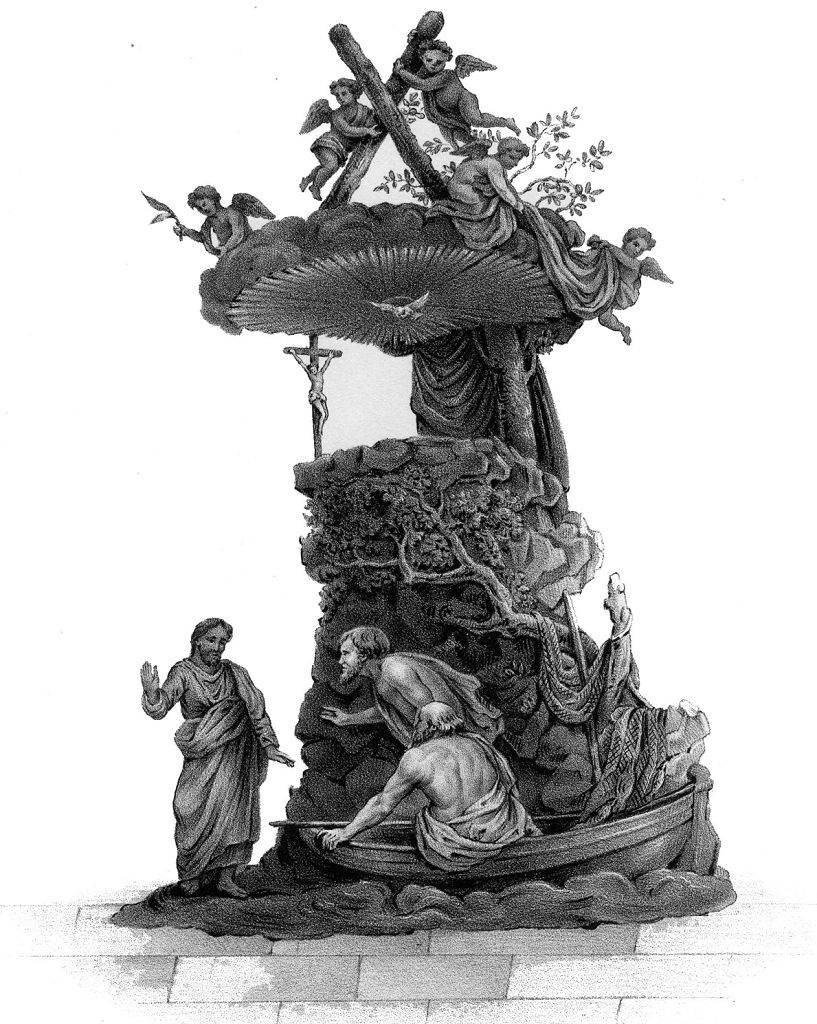 The present Baroque oak pulpit (1821-1825) is a masterly piece of work by sculptor Jan Frans Van Geel and carpenter Jan-Baptist Van Hool. It is the most famous pulpit in the country. This popularity is thanks to the true slice of life that has been represented in it. We see how the first two apostles, Peter and his brotherA male religious who is not a priest. Andrew, the patron saintThis is a title that the Church bestows on a deceased person who has lived a particularly righteous and faithful life. In the Roman Catholic and Orthodox Church, saints may be venerated (not worshipped). Several saints are also martyrs. of the parish, are called. Christ and the two brothers are large as life and nearly tangible, just as all the props of the story: the little boat, the oars, the net, the fish. Notice how the fish that have been caught do not feel ‘in their element’ any longer; only what has feet to their bodies, such as the crab and the lobster, can still escape. The realistic representation of the characters, their tools and their catch, amidst a naturalistic theatrical scenery of rock masses and plants, is astonishing. Mark how the preacherA priest, deacon or lay person who explains the Bible readings during the celebration of Mass. Sometimes a preacher also acts outside of Mass celebrations (and in the past he did so regularly) to clarify certain points of faith and to encourage the churchgoers to a more Christian way of life. can pull himself up by a smoothly polished branch (instead of by sharp rocks).

So much artistic attention was not to be wondered in a time without compulsory school attendance, TV or film. The pulpit was the pre-eminent means of communication to teach the public. In this respect we may think that the sculpted banderol on the tub might refer to the ancient custom during LentThis is the period of preparation for Easter. It begins on Ash Wednesday and ends on the Saturday before Easter. Without the six Sundays of Lent, there are 40 days in which Christians are expected to live more austerely. The last week of Lent is called Holy Week., to unwind a painted canvas as a way to illustrate the talk. Thus, around 1631 Sebastiaan Francken painted an “Ecce Homo shown in the Passion”.

True to the gospelOne of the four books of the Bible that focus on Jesus’s actions and sayings, his death and resurrection. The four evangelists are Matthew, Mark, Luke, and John. ‘Gospel’ is the Old English translation of the Greek evangeleon, which literally means ‘Good News’. This term refers to the core message of these books. Jesus addresses Andrew and Peter during their work as fishermen. They are called away to follow Him and to be ‘fishers of men’ henceforth. Without hesitating, but completely surprised by such an amazing call, they leave their nets behind. This is how Mathew tells the story (Mth. 4:18-20):

“ As He was walking by the Sea of Galilee, He saw two brothers, Simon who is called Peter, and his brother Andrew, casting a net into the sea; they were fishermen. He said to them, “Come after Me, and I will make you fishers of men.” At once they left their nets and followed Him.”

There is already something above Andrew’s head, but at this point he has not the slightest idea of his martyrdom. His martyr’s cross is shown triumphantly to the parishioners listening to the sermon: “Whoever loses his life for My sake will find it” (Mth. 10:39). In other words: “Whoever does not take up his cross and follow after Me is not worthy of Me” (Mth. 10:38) and whoever carries his cross till the end will once share the joy of celestial victory. The best sermon is not theory but the heroic example of flesh and blood. This example is given to the parishioners by their patron saint.  The typical signs of victory are the laurel wreath and the palm. An angel is holding the curtain, which is draped widely over the sound board.

There is hardly any better place than this to pray for vocations. Hence this prayer by the pulpit:

Our Lord, You never stop taking people to heart. We ask You: let ever again Your Son Jesus appeal to young and old people. May there also in our day be candidates to devote their lives to You as priests, deacons, nuns, brothers, missionaries, pastoral workers, catechists… May they devote themselves completely to You in their prayers and actions, and heartily give themselves to the Church and the people.

Is this sudden and radical U-turn in the lives of these two people, amidst their busy professional activities, not an invitation to you as well, to reflect on the way you fill your life?