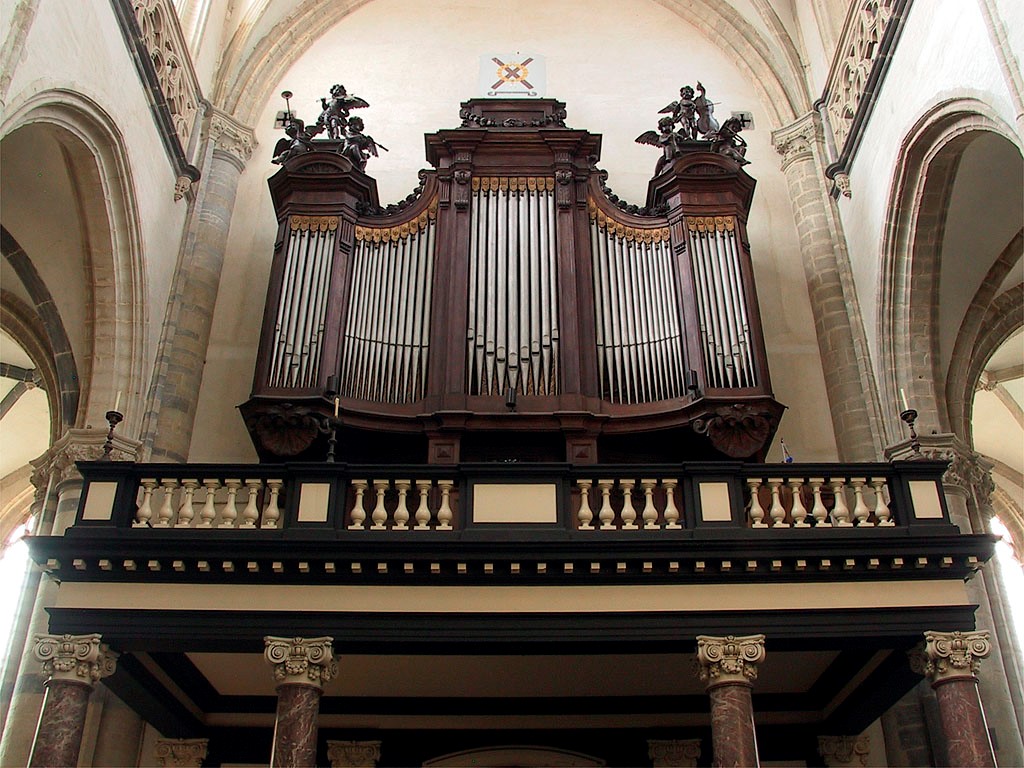 Various organs have succeeded each other on the rood loft above the big enclosed porchSpace which, usually on the inside, has been added against the outside door to prevent a continuous draught in the building when the outside door is open. against the west wall of the central naveThe space between the two central series of pillars of the nave.. After the destructions during the first Iconoclast Fury in 1566, among others the Fugger made a donation for a new organ in 1574. Exactly one century later this was replaced by a Bremster organ, which in its turn was lost when in 1755 the tower collapsed. The big, enclosed porch was rebuilt in 1611 by carpenter Otmaer Van Ommeren.

In 1770 a new enclosed porch was made, and one year later a new rood loft against the tower wall. Below this, at both sides of the central door, there were oak benches, the Table of the Holy SpiritThe active power of God in people. It inspires people to make God present in the world. Jesus was ‘filled with the Holy Spirit’ and thus showed in his speech and actions what God is like. People who allow the Holy Spirit to work in them also speak and act like God and Jesus at those moments. See also ‘Pentecost’., where help in kind was distributed to the destitute.

In 1778 a now organ-case was made after a drawing by Engelbert Baets, the architect of the tower, while Johannes Tits from Hoogstraten (21 miles north east of Antwerp) started building a new organ instrument, which however was rejected n 1784. In 1791, on the eve of the French Revolutionary Reign in our provinces, the organ instrument was adapted and perfected by Egidius Van Peteghem from Ghent, a scion of the famous family of organ builders.

As to style they did not give in to cool French Classicism. Willem Roefs provided a Flemish late Baroque decoration of the organ-case. Angels perform in a lifelike way on both towers. The standing angels on top play stringed instruments: the northern one a violin, the southern one a contrabass. The sitting flanking angels play wind instruments. At both sides of the organ-case there is an angel with wide wings under a fashionable broad ribbon to which a number of sculpted musical instruments seem to have been tied as trophies. The instruments have been rendered in the smallest details with stunning realism, albeit invisible to the audience. The violin and even the back of the guitar have tuning pegs. Some blowing instruments have holes for the left and right little finger, so that one can be plugged up with bee wax, depending on the imaginary player being right or left handed.

The old rood loft without supporting pillars had subsided and for that reason it was shored up for many years. Because “the musicians could not see each other” the singers tribune (the rood loft) was expanded by Jan Frans Van Geel with pseudo-marble pillars, painted by Hendrik Schaefels, in 1828.

In 1929, at the occasion of the 400th anniversary of the dedication of the church, the organ was provided with a pneumatic system and thoroughly rebuilt. In 1986 a restoration project was started…

Since the end of the 18th century the mechanism of the clock in the tower room had been connected with a large clock face as a crowning of the organ. It was accompanied by a verse of the Passion: “Ecce appropinquavit hora Matth. cap: 26 v 45”  (“the hour is at hand – Mth. 26:45”) This is from the scene in the Garden of Gethsemane, when Jesus calls on his disciples, who have fallen asleep. The message to be vigilant was clear, at least for the learned. The dial, which was removed during the 1970-1975 restoration works, is still waiting to be put back.

The confessionals and enclosed porches
The stained glass windows in the southern aisle: Mary’ s election