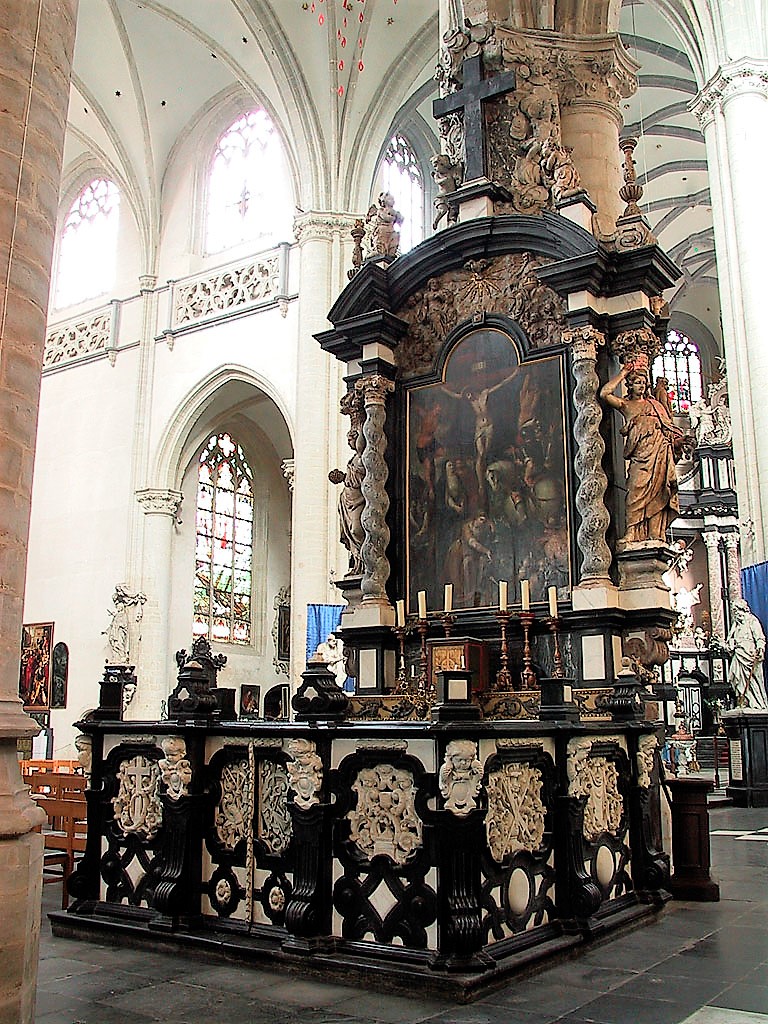 ‘Holy Cross’ refers to the cross on which Jesus died. True to medieval symbolism this devotion to Jesus’s sacrifice of love is situated at the sunny southern side of the church. Since Catholic worship was restored in 1585 the wooden Holy Cross altar has been in the southern aisle, but not always against the same pillar. In 1603 it was given the representation of Calvary by Frans I Francken.

In 1663, immediately after the transepts had been accomplished, the altar received a new position against the south-western crossing pillar. For the brotherhood this was the occasion to replace it by the Baroque portico altar by Cornelis van Mildert (1664-1665). Of the altarpiece only the central panel was preserved, with some smaller adaptations.

In the centre of the painting Jesus is hanging, nailed to the cross. His head is bent to the right: for He is already dead. His ashen body contrasts with the dark red sky, illustrating Biblical “darkness”. Above Him is the trilingual explanatory caption, each version being limited to four initials. His mother Mary and John the apostle are the only ones who stand by him in these last moments by standing by Him (iconographically on the right). In the foreground Mary Magdalen embraces the cross. On Jesus’s left and right are the crucified murderers. Their hands are tied with ropes, only their feet have been nailed. The repentant, also called ‘good’, murderer, (iconographically) right of Jesus, looks at Him longingly. To the ‘bad murderer’, on His left and looking away, are shown the two tablets of the (Jewish) law: an allusion to the Christian custom of showing the crucifix to the condemned. The soldiers who are dicing for Jesus’s clothes have real character heads  with true villain’s faces. Two bohemian types look on: a disabled one with a stick and holding a cute dog on his lap; the other one has a strikingly red nose, which might be explained by the small barrel in the bottom right corner… In the bottom left corner there is a wicker basket with tools for the crucifixion. The skull and the separate jawbone at the foot of the cross do not only refer to the name of the place of the execution: Golgotha or Place of a Skull. In the first place the so-called Adam’s skull indicates the extent of the event: by His sacrifice of love until His death on the cross Jesus has liberated all mankind from the power of evil, or the original sin.

This Calvary was spread by a print containing a devotional poem and a woodcut after the painting, by Christoffel Jegher (1637), who was also a parishioner of Saint Andrew’s. In January 1886 this scene, and more specifically the red colours of the sunglow, was admired by apprentice painter Vincent van Gogh.

This side altar in the form of a portico is exceptionally high Baroque, even for Antwerp, and many an interior painter has been attracted by this picturesque corner. The two inner pillars are heavy twisted specimens. Even more Baroque are the outer pillars in the form of caryatid sculptures. The hyper realistic wicker flower basket they are holding on their heads with their hands is a successful sculptural form of a functional capital. These flower girls, turning somewhat to the outside, give this altar a vivid and festive character.

Because also the brotherhood of Holy Trinity used this altar, on top of the altarpiece the tympanum was added with a representation of Holy Trinity in 1707. Later the membership list of this brotherhood was hung at the back of this pillar and in 1966 the last stained glass window in the southern aisle was devoted to the Triune God.

The altar rails were made by Jan and Jan Antoon Van den Cruyce (1671-1672). White panels in which the tools of the passion have been incorporated very decoratively contrast with the black marble of the constructive frame.

A bulrush, referring to the reed stem Jesus was given as a sceptre after His flogging, crossed with the hyssop stem with which a sponge with sour wine was passed to Him at the cross.

The sword with which Peter cut off Malchus’s, the high priest’s servant’s, ear, the whip with which Jesus was flogged and the lance with which Jesus’s heart was pierced. Notice the two masks in the plant motive!

Right: the cup of the Last Supper. In His agony Jesus asked to take this away from Him.

On the plinths of the set of candle holders of this altar the cross is flanked by emperor Constantine and his mother, empress Helena. In 313 Constantine the Great granted religious freedom to the Christians after his victory ‘in the sign of the cross’, so that henceforth the cross could be shown publicly as a sign of faith. According to tradition the emperor’s mother found the cross of Christ.

Monument for the Holy Cross

As if an altar was not sufficient, at the end of the 18th century also a separate monument was constructed for the relic of the Holy Cross. This object of devotion found a home here after the contemplative White Sisters Convent was considered ‘useless’ and abolished in 1784. The Baroque group of statues has been built up around Jesus on the cross, with at His feet the pair of brothers Peter and Andrew with their respective crosses. After all everybody has ‘his cross to bear’. This variety of different shapes of crosses is the most beautiful illustration imaginable of Jesus’s appeal:

What is Truth?
Saint Anne's Altar