In 1659 the SaintThis is a title that the Church bestows on a deceased person who has lived a particularly righteous and faithful life. In the Roman Catholic and Orthodox Church, saints may be venerated (not worshipped). Several saints are also martyrs. Lawrence Parish is the first to be erected outside the city walls.

The present church, already the fourth in a row, is a remarkable monument from the interbellum, in Neo-Byzantine style with Art Deco elements. She is consecratedIn the Roman Catholic Church, the moment when, during the Eucharist, the bread and wine are transformed into the body and blood of Jesus, the so-called transubstantiation, by the pronouncement of the sacramental words. in 1934.

Striking in the landscape is the central building with a dome and robust freestanding tower (65 m). The tower and the Baptistery limit the atrium at the main entrance.

Architect J. Huygh adopts an overall concept for the building and its furnishings. To achieve this he appeals to different contemporary artists. Architecture, decoration and furniture are specifically designed based on the rich symbolism from the artist’s movement ‘De Pelgrim’.

The main altarThe altar is the central piece of furniture used in the Eucharist. Originally, an altar used to be a sacrificial table. This fits in with the theological view that Jesus sacrificed himself, through his death on the cross, to redeem mankind, as symbolically depicted in the painting “The Adoration of the Lamb” by the Van Eyck brothers. In modern times the altar is often described as “the table of the Lord”. Here the altar refers to the table at which Jesus and his disciples were seated at the institution of the Eucharist during the Last Supper. Just as Jesus and his disciples did then, the priest and the faithful gather around this table with bread and wine. (A. Bressers) stands in the middle, just as Christ is the central figure in the Church. The four large double pillars supporting the dome, are topped with majestic bull figures whose head is the allegorical depiction of the four evangelists (Rik Sauter).

The large, round chandelier (R. Haan) with its 72 lamps, recalls the 72 disciples of Christ. The pelican, many times represented both in stone and in bronze stands as a symbol of Christ’s love.

The organ, built by B. Pels, and inaugurated in 1935 by Flor Peeters, still accompanies the celebrations and is regularly played for concerts.

The colourful mosaics (J. Collette) and the stained glass windows (J. Collette-Fr.Slijpen) are installed in the fifties.

In 1975, when rearranging the Baptistery as a week chapel
A small church that is not a parish church. It may be part of a larger entity such as a hospital, school, or an alms-house, or it may stand alone.
An enclosed part of a church with its own altar.
, two stained glass by J. Huet are placed. Finally, 2 modern stained glasses and the connecting door to the church are set up in 2009 by Joost Caen. 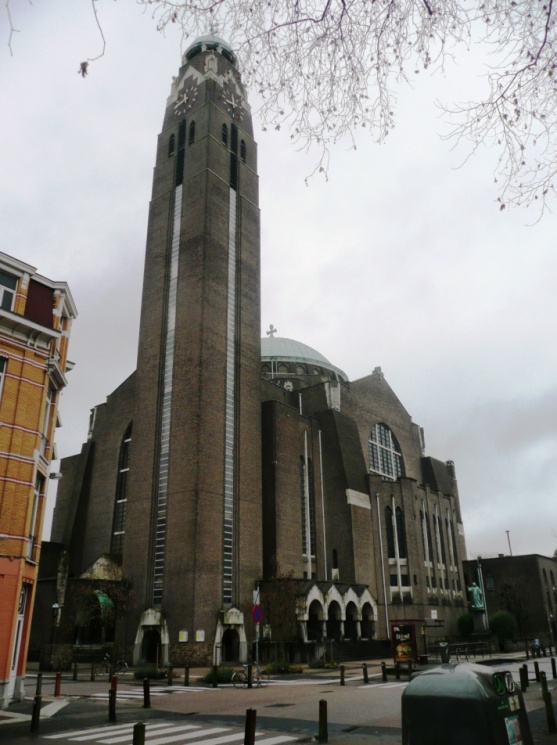 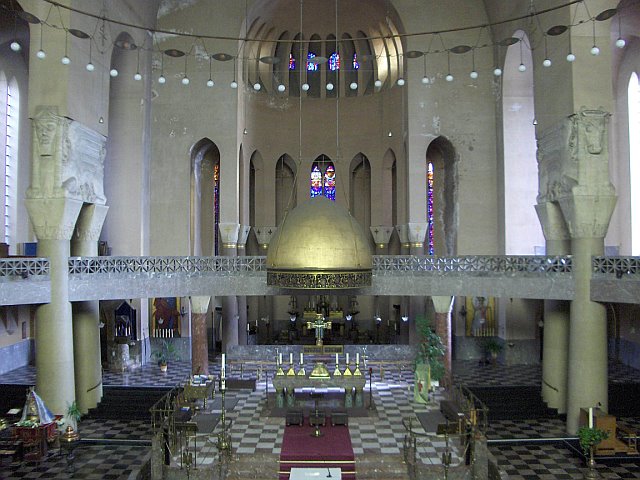