About
‘registers and paintings, portraits and copies’
in Antwerp churches and monasteries

When mentioning Anthony Van Dyck, one usually thinks of his brilliant achievements as a portrait painter at the English Court. However, his short stays in his native city of Antwerp were always a trigger for orders for portraits of numerous prominent persons. His overall contribution here as a painter of religious pieces is equally unknown. Van Dyck’s relationship with the various monumental churches in Antwerp is greater than is usually suspected.

Therefore, TOPA organised an exhibition that ran from 17 May to 30 September 1999 as part of the Van Dyck 1999 project of Antwerp Open vzw.

The exhibition took place in the churches concerned, where all elements were illustrated, either by the works of art themselves or by 17th century engravings or photographic reproductions.

First, church archives contain some important biographical data about the Master: from baptismThrough this sacrament, a person becomes a member of the Church community of faith. The core of the event is a ritual washing, which is usually limited to sprinkling the head with water. Traditionally baptism is administered by a priest, but nowadays it is often also done by a deacon. to testamentary dispositions. Was he not born in the shadow of the CathedralThe main church of a diocese, where the bishop’s seat is.?

For several of these churches, he produced one or more religious works, such as The Carrying of the Cross in the St. Paul’s Church, or the very well-known The Holy Rosalia and BlessedUsed of a person who has been beatified. Beatification precedes canonisation and means likewise that the Church recognises that this deceased person has lived a particularly righteous and faithful life. Like a saint, he/she may be venerated (not worshipped). Some beatified people are never canonised, usually because they have only a local significance. Herman Joseph for the Marian congregations of the Jesuits.

Besides, attention was also paid to several copies by and copies after Van Dyck, both as regards portraits for epitaphs and religious pieces, especially for the Marian devotion.

The Our Lady’s Cathedral has a special relationship with Anthony Van Dyck. His fatherPriest who is a member of a religious order. Frans was serving master in the Venerable Guild and married Maria Cuypers there in February 1590. Their son Anthony was baptised there on 23 March 1599 (the baptismal register is kept in the City Archive). His very last religious orderOrganisation of unmarried women or men who want to live in community to devote themselves to religious life. They follow the rule of their founder: e.g., Augustine, Benedict, Norbert, Francis, Dominic, Ignatius, … When joining the Order, members take three vows: obedience (to the superior), poverty (no personal possessions) and purity (no physical relationship). was for an altarpiecePainted and/or carved back wall of an altar placed against a wall or pillar. Below the retable there is sometimes a predella. for the Guild of the Young Crossbow. Due to his premature death, this was executed by Cornelis Schut (Royal Museum of Fine Arts Antwerp, inv. 327). Several prominent persons who were closely involved with the cathedral had their portraits painted by the master: bishop Malderus, the canons Aubertus Miraeus, Antoine de Tassis and Zeger van Hontsum, and the organist Hendrik Liberti.

In the St. Andrew’s Church, the epitaph of the married couple Jan de Wael and Gertrudis de Jode could be admired until the 19th century. Although its painter is still unknown, the portraits of the couple on the shutters were copied after the very famous double portrait by Van Dyck (Munich). One of the 19th-century Stations of the Cross is also said to be inspired by Van Dyck’s The Carrying of the Cross.

Van Dyck was closely associated with the Antwerp Jesuits. For their church, the present St. Charles Borromeo’s Church, P.P. Rubens provided the 39 now disappeared ceiling paintings in 1621. For this, he was assisted by Van Dyck. In 1628, Van Dyck became a member of one of the Jesuit Marian congregations and for this occasion he painted one of his most beautiful works, The Holy Rosalia. For the same Sodality, shortly afterwards followed The Blessed Herman-Joseph (both in Vienna, Kunsthistorisches Museum). Several Jesuits who belonged to his circle of scholars were portrayed: Carolus Scribani, Jean-Charles della Faille and Jean-Baptiste de Bisthoven.

Van Dyck never received a commission for St. James’s Church, nevertheless one of the most beautiful churches in the city, especially known for the grave of P.P. Rubens. But it was in this church that, in 1660, his daughter Justina and her husband Sir John Stepney were rebaptised and remarried according to the Catholic rite.

As a result of the French Revolution, only The Carrying of the Cross for the Dominicans can still be seen on site in St Paul’s Church. That is why this work of art was the main attraction of the exhibition. The number of preserved sketches for this youthful work by Van Dyck is rather exceptional: ten in number. The last one, the final modello, is kept in the Antwerp Print Room.

All data were published in a valuable catalogue with colour illustrations and scientific contributions by several art historians. 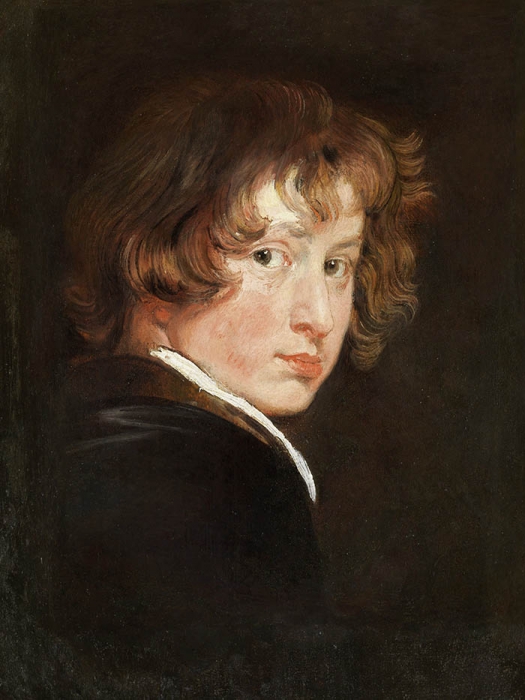